I suppose the story starts sometime in the summer of 1990. Or, more accurately, on June 8.

This was the day when Argentina played Cameroon in the World Cup finals, in hot, sweaty Milan. I wasn’t anywhere quite so exotic, I was at school, watching on a television I had illegally smuggled in and which was confiscated a few days later during the Scotland v Costa Rica game – possibly for the best.

Yet this was not before I had thrilled at the sight of Claudio Caniggia evading one murderous challenge after another, before …ouch!… being finally felled by the last of three Cameroon defenders who had attempted and finally succeeded in halting his splendidly athletic dash down the wing. The images remain iconic. The run recently featured at No.2 in a countdown of the greatest ever World Cup moments.

It certainly remained with me. You could keep Maradona, because Caniggia was the man. So, it didn’t take anything as brutal as a Cameroon defender to knock me down when, 10 years later, the man known as El Pájaro [The Bird] landed at my team, Dundee.

Having not long started working at The Scotsman, I made it my life’s work to obtain an interview with him. The sit-down with Claudio.

The set-up at Dundee at the time was not given to such routine practice as making an interview request and then waiting to hear if it had been granted, and, if so, where it would take place. Word eventually came back to me via a network of individuals that Dundee had working for them at the time and I was given the nod, but Claudio never seemed to be where he was meant to turn up. Like defenders, I was having trouble pinning him down. Until, finally, I was told to get myself to the park where the club trained at the time, the less than salubrious Michelin factory training fields.

Even this looked like it would turn out to be another aborted mission. A journalist form GQ was there and, though I feigned sympathy when I heard that he, too, had been getting the run around, I was secretly delighted. The men’s style mag’s photographer snapped away at a notice board in the dilapidated changing rooms. On it was pinned a Christmas card, depicting Claudio in a Santa hat (Dundee didn’t miss a trick during his short stay). On it someone had scribbled a speech bubble: ‘Got any drugs man?’ It was clear GQ were intent on taking the piss a bit. As for me, it was still a case of ‘No speakee’ with Claudio until I got word that he wanted to do the interview back at Dens. I got back into my trusty Golf, Claudio climbed up into his rather more powerful choice of vehicle. And we were off.

So there I was, desperately trying to keep a legendary Argentinian footballer in my sights for fear that he might shake me off once more by taking a sneaky side-street in Douglas. The thought struck me that chasing Claudio Caniggia through the streets of a housing estate in Dundee might possibly be the most surreal thing I would ever do as a sports journalist. This hunch has so far proved correct. Eventually, finally, we were at Dens.

I’d by lying if I said it was the most in-depth interview ever. Claudio conducted most of it through an interpreter, a chap called Dario Magri – one of the throng of Italians Dundee had working for them at the time. He spoke about wanting to play golf in St Andrews, about how Dundee was his favourite Scottish city. He mentioned wanting to use Dundee as a platform to get back into the Argentina squad, which he did. It was simply enough to be in his company. And the photograph we used next to the piece said more than my 1300 words could, in any case. There was Claudio in the mud and grime, looking, it has to be said, slightly stunned to be in situation where he was required to pose in a public park in Dundee with puddles at his feet.

On the pitch he never played as though he felt this was all below him. I couldn’t let the moment pass. I brought out a No.33 (Claudio’s age at the time) Dundee top, with his name arced across the shoulders, and asked him to sign it. Only on one other occasion have I found myself doing this, after interviewing Seve Ballesteros. But then Claudio was in Seve’s class, no question. And then, breaking another golden rule, I couldn’t help but jump up from my seat when, reporting on Claudio’s debut, he scored in the final minutes of a win over Aberdeen at Pittodrie.

But that’s another story. 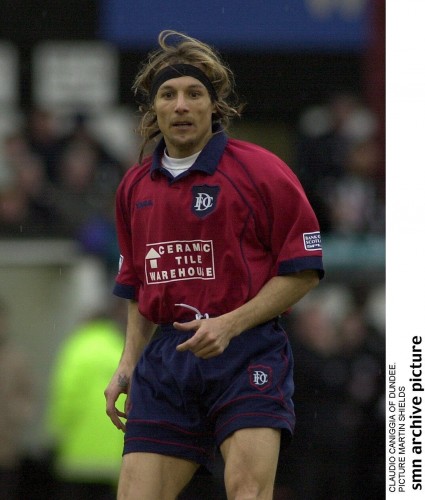