I have a lot of great memories as a football fan, from Rangers winning the European Cup Winners’ Cup to Scotland beating England at Wembley in 1967. However, the one that stands out is the 1963-64 Scottish Cup final, Rangers against Dundee.

If Rangers won the match then they would claim the Treble, which was such a big thing in those days. If you’re a fan for long enough, you’ve probably got a particular team that means more to you than any others – and I can still remember all the names of that side: Ritchie, Shearer, Provan, Greig, McKinnon, Baxter, Henderson, McLean, Millar, Brand and Wilson.

I was in the North stand at Hampden that day, there was a huge crowd of over 100,000 and it was 0-0 at half time. Then Rangers scored early in the second half to make it 1-0. Dundee, who were a great side at that time, went straight up the field from kick-off and equalised.

Rangers absolutely bombarbed them but the Dundee goalkeeper, Bert Slater, was magnificent. So much so, they actually called it the Bert Slater Final.

It stayed 1-1 until the last couple of minutes and then Jimmy Millar and Ralph Brand scored to give Rangers the win. I was 24 at the time and I’ll never forget that day. Davie Wilson grabbed one of the directors’ bowler hats and was going around the pitch celebrating with it on.

It was special that Jimmy Millar scored because he was my all-time hero. He never took any nonsense. There was none of this rolling around on the ground or screaming at the referee nonsense. If you clattered Jimmy Millar, he got up, dusted himself down, took the number of the guy who had done him and gave him it back.

I remember Rangers playing St Johnstone once at Muirton Park. We were behind the goal, the ball was up the other end and Jimmy Millar and the big Saints centre-half Ron McKinven were standing about 10 yards apart. You could see that they were having a few words. Next thing, Jimmy ran over and laid him out flat! Nobody even saw it because the ball was up the other end!

Davie Hay once told me that he played against Jimmy when he was a young player for Celtic against Dundee United in a reserve game. Jimmy was a veteran player with Dundee United at that stage and Davie was just looking to make the breakthrough.

Davie had heard me talk about Jimmy Millar being my favourite player and said he was one of the hardest guys he had ever played against. At the end of the game, Jimmy came up to Davie and said: “You’ve got a good chance.”

Jimmy Smith is Walter Smith’s favourite player too. He’s in his late seventies now. He used to do the lounges at Ibrox. People say you should never meet your heroes for fear of being disappointed, but Jimmy Miller would never disappoint anyone.

I introduced my daughter to him at Ibrox a few years ago and he was so polite. Before we sat down, my daughter said to him: “Jimmy, when I was six years old, I wanted to be you!” 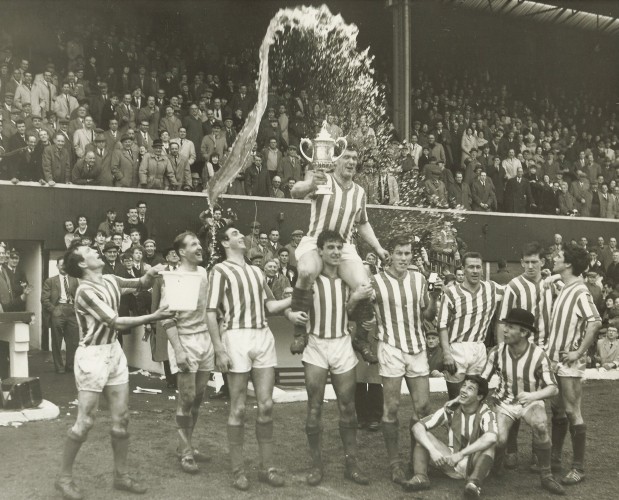