I was 13 years old when I found God. Or, to be more accurate, Jim Jefferies, Falkirk manager, located him for me.

Ask any Falkirk fan of a certain age their favourite player of all time and they will be guaranteed to give you the same name: Simon Stainrod. And little wonder. Supporting Falkirk is largely a grim affair with very few highlights (I am long since resigned to the fact I will never follow in my dad’s footsteps by seeing Falkirk lift the Scottish Cup).

But for 61 wondrous games after the ego had landed from French side Rouen, God was on our side and with this strutting, preening peacock of a player in our midst, Falkirk could not fail.

Here was a guy who had once turned down the chance to sign for Barcelona, believing the trial offered by then-manager Terry Venables was beneath him.
Stainrod, you see, had nothing to prove to anyone, and the 31-year-old former Queens Park Rangers striker knew life up north was going to be a breeze after being voted man of the match in a six-a-side tournament in Musselburgh against first-team players from Hearts, Hibs, Dundee and Motherwell. “I thought they were youths and reserves,” he beamed.

But the guy could walk the walk as well as talk the talk. Whether it was shameless showboating by kneeling on the ball in the corner flag before flicking it away; scoring from the halfway line against St Johnstone; heading a stunning winner against Celtic, God certainly earned his nickname in the best era to be a Falkirk fan in the modern age.

Almost 20 years later, while checking into a Sheffield hotel on business, a pretty young 20something blonde receptionist was taking my details when she suddenly looked up.

“You’re from Falkirk? You’ll know my dad,” she smiled before pointing to her nametag.

I wanted to tell Georgina Stainrod that my fondest memories from growing up involved her dad’s Falkirk team and following it all over Scotland with my own dad and my younger brother Graham.

And to confide in her my frustration that football is pilloried as a catalyst for lowest-common-denominator criminality when for the silent majority it’s the glue that bonds families together.

“The Daughter of God?,” was the spluttered sound that spilled from my idiotic lips, prompting a roll of the eyes and a sweet smile from the lovely Miss Stainrod.

That night I recalled my favourite Stainrod memory of all: when Falkirk faced Partick Thistle in a Scottish Cup replay under the floodlights at Brockville in January 1991.

Partick pest Bobby Law tried everything in his armoury to wind up Stainrod but good triumphed over evil and, fed up of Stainrod’s mockery with the ball, Law was sent off for slapping the Englishman. Stainrod may not have scored that night but he pulled the strings as Falkirk pulled off an incredible comeback, scoring two late goals to win 4-3.

His stay at Falkirk was brief but flawless and he duly moved to manage Dundee (wearing a Fedora) where he was ousted (“For being too popular”) before managing then quitting Ayr United in typical Stainrod fashion: bemoaning how useless the Ayr United players and heading off to be an agent in Cannes. Where else?

Stainrod may be long gone from Falkirk but God’s image endures in 2011: on a stained-glass window within Morrisons supermarket, which was built over the glorious ruin that was Brockville Park. It is no coincidence, I like to think, that his picture hangs almost equidistant between the aisles containing the loaves and the one containing the fishes. 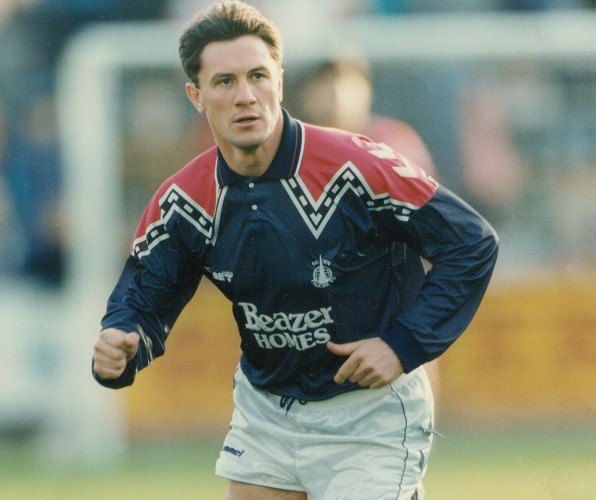