My most enduring football memory is the 1985 Scottish Cup final, in which Celtic beat Dundee United 2-1. The match, played on May 18, was one of the last classic Hampden finals in which most spectators stood upon the three huge terraces of the old stadium.

An odd fact is that my late father paid the admission for himself, me (aged 12), my two brothers and one of my sisters, at the gate!

The reason the game is so special to me is that it literally, within the space of a few minutes, converted me to football, and the romance and joy of supporting Celtic FC.

Up until that date I had been to a number of senior and youth matches, the first being a drab 0-0 draw at Partick Thistle in 1979, but if truth be told I only went along because I wanted to emulate my older brother John, a complete football obsessive.

I actually found the sport fairly dull (with the notable exception of the 1982 World Cup semi-final between France and West Germany), the matches overly long and I probably didn’t have a good view of the action anyway – I wasn’t prescribed spectacles for short-sightedness until 1984.

What unfolded was a classic Celtic comeback made all the more stirring because it was the 100th final, against the greatest side in United’s history, who only the year before had come within a whisker of reaching the European Cup final.

David Hay’s side wasn’t quite vintage Celtic – their defence was inconsistent – but from midfield to front it was classically attack-minded, with the mercurial talent of Paul McStay aided by the controlled aggression of Murdo MacLeod and the classy wing skills of David Provan.

Celtic also had the veteran Danny McGrain, one of Scotland’s greatest-ever full-backs. United had less concerns about defensive vulnerability, with Gough, Hegarty, Narey and Malpas reading like any manager’s dream back four. They were also guarded by the magnificent Eamonn Bannon in midfield. Should Celtic fall behind they might find it impossible to break down their opponents.

Unfortunately, that is exactly what happened. After a goalless first half which did little to change my lukewarm opinion of association football, Terrors forward Davie Dodds marauded into the danger area and passed for Stuart Beedie, who scored the opener.

But Celtic weren’t done, and attacked courageously as they searched for the equaliser. The crowd roared the team on, and the effect on the players was tangible.

Suddenly the whole thing made sense to me: the combined will of tens of thousands of people all focused on one outcome, on one dream. Something made sense about Celtic, too: the way they played relentless, attacking football. It was exciting. It was heroic. It was beautiful.

Eventually Celtic earned a free-kick near the edge of the United penalty area. Provan stepped up to strike the ball sublimely, lifting it over the wall and into the United net.

Roy Aitken, a Celtic stalwart who was moved from defence to midfield after Beedie’s goal, had the previous May achieved the inglorious feat of becoming the first player to be sent off in the final’s history.

That red card in the defeat by Aberdeen had been harsh, and ‘The Bear’ was clearly keen to make amends, turning in a performance of great passion and technique. His best contribution was six minutes from time, when he tore down the right wing and hoisted a perfect cross over for Frank McGarvey to power into the net with his head. The north enclosure exploded with joy and my conversion was complete.

At the presentation the late Tommy Burns, who would go on to manage the club he so loved, gave the lovely, green-ribboned old trophy a particularly joyous shake.

Charles is co-author of forthcoming novel The Road to Lisbon, due in May 2012. 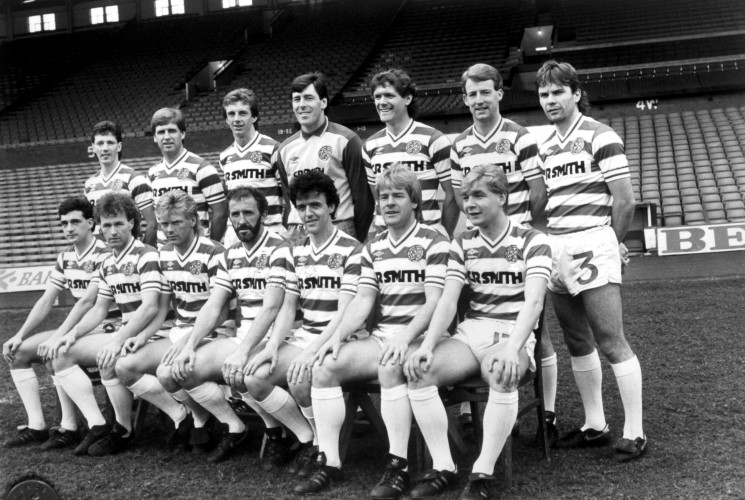