For all intents and purposes, Wednesday, March 24, 2010 was the day we won our second Scottish Cup, but nobody knew it at the time.

Under the floodlights, it had been all United in the first half, with Allan McGregor really having to stay sharp for Rangers.

When Lafferty got away with a handball, I really felt that it was going to be yet another game against a 12-man Old Firm team.

The second half was again loaded with chances and I have to admit to being worried when Nacho Novo and Kenny Miller were both brought off the bench, but when Goodwillie scored, the worry went away in an instant.

Incredibly, the ref ruled that Goodie had been offside (if he was, then it must’ve been by a shinguard). But, in the 89th minute, it was Roy of the Rovers stuff.

For me, David Robertson’s winning goal was a surreal one. I was in the Eddie Thompson Stand and from there I couldn’t see it going in, only the players running to the touchline. I thought something had happened and the players were running to argue about something with the linesman, a penalty claim, perhaps.

I then saw the George Fox Stand celebrating but I was waiting for the linesman’s flag to go up. Slowly, like a Mexican wave, the celebrations spread along the George Fox and I actually froze as I couldn’t believe it. The flag was staying down.

I went ballistic and climbed over the seats down to the front and did the ‘Shed Boys Dance’. I then held my tangerine scarf above my head facing the Bears in the Jerry Kerr Stand and just stood there with Cantona-style arrogance.

It was such a strange goal because it took around five seconds to register with all of us at the other end of the stadium.

It was a packed Tannadice that evening and one that few in attendance will ever forget. I now treasure the match programme from that night. David Robertson very kindly signed it for me.

Robertson is now doing well along the road for St.Johnstone, but for Arabs, he’ll always be known as ‘Treble Buster’. 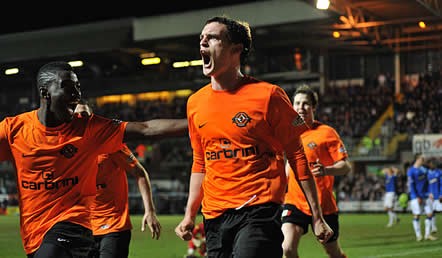