One of my most treasured memories of watching St Mirren came in October 1983, in a game against Celtic at Love Street. In preceding seasons, Celtic had given the impression that they didn’t consider it worth turning up against St Mirren for less than five, and when they went two up with their first two attacks, I must confess I was already consoling myself that at least I would get to see some goals that afternoon.

But then two events changed my gloomy outlook, although they could not be said to be related by anything more than that they took place within 100 yards of each other. The first happened in the crowd, and involved a character familiar from previous Old Firm matches at Love Street: the drunken hardcase wandering provocatively around the home supporters’ section of the terrace.

This particular peace envoy — who rather distressingly looked no older than 16 — found a good sounding-spot about five yards down the terrace from where I stood, and began swearing happily at the Buddies’ hard-core North Bank support.

Then I heard a loud cry of “HAW!” from the back of the terraces, and turned round to see a barely-chewed pie sailing through the air. I was able to follow its flight path almost from launch until it impacted entertainingly on the face of our erstwhile taunter. He had looked up in response to the shout but was too drunk to move out of the way.

Fixed by that particularly adhesive grease that holds such delicacies together, the pie sat there on his face as he wobbled uncomprehendingly for a few seconds, then slid slowly down and eventually fell off. He staggered away in silence into the waiting arms of some kindly gentlemen in blue uniforms, who were offering to escort him to less hostile surroundings.

The second event was that John “Cowboy” McCormack suddenly seemed to decide that two goals was enough of a start, and set about relentlessly demolishing Celtic’s midfield. I think Frank McDougall got the first, and I remember thinking that things might not end so disgracefully after all. Within about 10 more minutes we were leading 3-2, and the Celtic fans’ chants of “So f****** easy” were just an amusing memory. Less amusing was that by the time the third bout of jumping ecstatically around the terraces was over, I had moved a bit of a distance from my original position, and looked down with mixed feelings to see that for the last few seconds I had been jumping up and down on that pie.

Celtic struggled in search of an equaliser in the comparatively disappointing second half, and piled on increasing pressure, only for it all to fall apart when Ian Scanlon burnt the ball past Pat Bonner from a full 40 yards. In a good-natured, sporting gesture, a couple of Celtic fans standing nearby (I had moved round behind the Love Street end goal by this time) threw their scarves to the floor and said “f****** jammy bastards” before walking out in disgust. 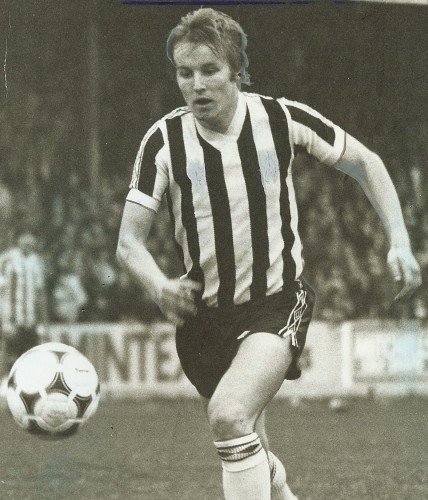