We all remember our first. My first love was Libby Friel from Brockburn Rd in Pollock. My first album was Adam and the Ants’ King of the Wild Frontier. My first gig was INXS at the SECC.

And so it proved with my first cup final – the League Cup Final of 1987 between Rangers and Aberdeen. A game I will always remember.

I was only 14 and dogged the school to queue outside Ibrox at 7am on a cold, early October morning for my ticket (price £4). The buzz at that alone was tremendous. Standing as one with fellow Bears reading the papers, bantering and talking football. This was almost like a coming of age. No more acting the shy boy, cowering behind my dad when the patter was flying at Ibrox on matchday. My apprenticeship was over, I was a time-served Bear now who had sacrificed a day’s education in order to secure attendance at a big game.

The game itself was a classic. It finished 3-3 and had to be settled by penalties, Ian Durrant being the lucky recipient of Peter Nicholas’ miss. The atmosphere simply blew me away from the first minute to the last, and I was lucky enough to witness a true moment to remember in Davie Cooper’s stunning free-kick.

With Rangers 1-0 down, and making heavy weather of getting back into it, it took the reliable and faithful servant of old to deliver a lifeline.

I had grown up adoring Cooper. He was a class act, and for a good while during my formative years of going to Ibrox the only reason to go and watch Rangers, as the club struggled badly in the pre-Souness years.

By the time Souness arrived in 1986, my first love of Ibrox was in the veteran stage of his career and not hitting the heights of the past. But he delivered that day and hit a free kick of such ferocity that Andy Cameron commented: “If it wasn’t for the net, the ball would have landed in Rutherglen”. He was only half-joking!

It got Rangers back in the game that day, and it was fitting that my first Ibrox idol played such a vital part in my first cup final win. 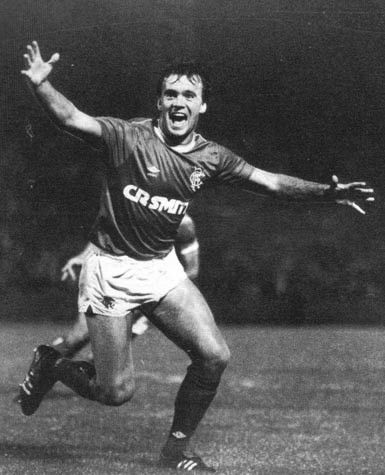