I can remember the date like it was yesterday. December 25th, 1981. It is engrained in the memory! Why? Because I received a Xmas present of such magnitude and importance that it immediately relegated the Raleigh Grifter I had also received into second place. What was this wondrous gift? My first Rangers replica kit!

Now technically I did already own a Rangers replica kit, but it was one of those fake ones that poorer kids got. It wasn’t manufactured by Umbro, and the crest had to be ironed on – which inevitably came off after about five minutes into its first wash.

This, however, was the real deal. The jersey was royal blue with pinstripes, and had a white V neck with a blue and red trim. It was a silky material, the first Rangers kit of its kind to move away from the traditional heavy cotton-like jerseys, and the shorts we’re plain white with the crest and manufacturers’ logo on it. The socks were red with a blue and white trim.

I, of course, wore the kit to its death. It only lasted a couple of years before succumbing to death by a thousands washes, but I have fond memories of it. I wore it whilst repeatedly watching the 1982 League Cup Final against Celtic on video. Rangers lost 2-1, but I loved Jim Bett’s free-kick so much that I kept watching it. I can still hear Jock Brown proclaiming that “Rangers are right back in the match!” after Bett’s sublime effort left Bonner grasping fresh air.

I also wore it when I witnessed a supreme effort from a brave Rangers side just lose out to Alex Ferguson’s newly crowned European Cup Winners Cup winning side in the Scottish Cup Final of 1983. And it finally witnessed victory when Ally McCoist’s hat-trick against Celtic won the 1984 League Cup Final.

It eventually became tattered and crestless through overuse and washing, and was binned by late 1984, but I still get a lump in the throat when I see it. Add the old 80s Ibrox square goalposts to the picture and that lump in the throat becomes a tear in the eye! 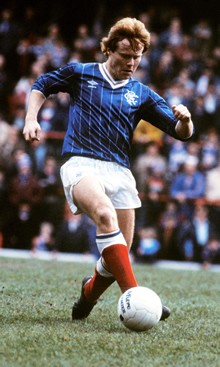