I believe that aliens will be able to enjoy football more than humans because to them everything on earth must seem eccentric. Although I am not an alien, I hail from the Land of the Rising Sun and I enjoyed SPL football more than many Scottish people.

On April 24, 2008, I was on the platform of St Enoch subway station heading out to Ibrox for the UEFA Cup semi-final match between Rangers and Fiorentina. I was lost in my thoughts about the match when, suddenly, a bunch of Rangers supporters with bottles of Buckfast in their hands were closing in on me.

They started to chant:
“Nakamura ate my dog!”
“Ate my dog…”

I was disgusted, but at the same time it was very funny. Does Nakamura eat dogs? Absolutely not. Do the Japanese eat dogs? We don’t, but some Koreans do. I think “Nakamura ate my dog!” could have been an interesting sectarian song. Whilst being surrounded by the Rangers supporters, I finally understood the essence of Scottish football.

Scotland is totally different from Japan and everything was interesting to me. The depth of the rivalry between Rangers and Celtic does not exist and probably never will between teams in the J.League. I have never heard Yokohama Marinos supporters sing: “Alex Miller ate my sheep, Ate my sheep!”

And the UEFA Cup semi-final match? I was really looking forward to seeing Adrian Mutu, Riccardo Montolivo, and Mario Alberto Santana, but to be honest, I don’t remember anything about them. That means Rangers defended very well. 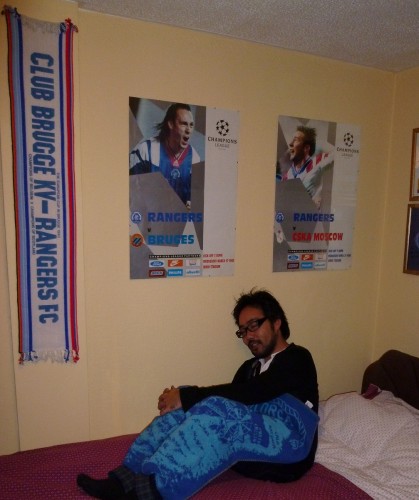