IRELAND’S most successful football club spent the best part of two decades in the wilderness, but our recent history has given us so many reasons to be cheerful.

We’ve just won back-to-back league titles and become the first Irish side to qualify for the group stages of the Europa League.

Six years ago, we were relegated and on our death bed as an institution, but since 2009 we’ve welcomed Real Madrid, Juventus and Copenhagen to our newish home in Tallaght, south-west Dublin, with Spurs due on December 15 2011.

My dad first took me to our former home Glenmalure Park sometime in the mid 80s. Sadly, he’s had dementia for quite sometime now, so I really think this is a fantastic initiative.

I’ve him to thank for Rovers and there’s been so many memories I’ll cherish forever. Traveling to Italy to play Juventus last year was pretty special, but I think the ‘kodak moment’ is definitely going 1-0 up at White Hart Lane five minutes into the second half when playing Spurs away on September 29, 2011.

I was so jubilant that a policeman thought I was about to invade the pitch when I raced towards the corner flag, but he was very understanding of the enormity of what had just happened and just patted me on the back!

While the lead only lasted nine minutes, it really was fairytale stuff. Approximately 2500-3000 fans stayed in White Hart Lane long after the final whistle singing our hearts out, even though we’d lost.

I was lucky enough to be in White Hart Lane on the night in April 2010 that Danny Rose scored that wonder goal in Tottenham’s first league victory over their arch rivals Arsenal in 11 years.

If you’d told me then that I’d be back in the Lane to watch my own club play in a competitive fixture, there’s no way I would’ve believed you.

What an amazing adventure it’s been with the world’s greatest football club, whose fans refused to let the club they loved so much die. Ever since, the club has returned that love in spades. 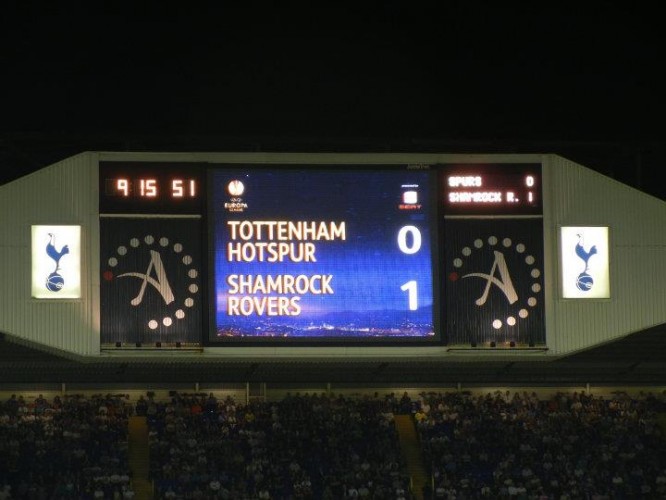