Few, if any, present-day fans under 60 are likely to have a proper appreciation of the heady level of the game at which Scottish teams competed with conspicuous distinction during the 1960s and early 70s.

When Celtic triumphed in the European Cup in ’67, for example, Rangers simultaneously reached the final of the Cup Winners Cup and Kilmarnock the semi-finals of what is now the Europa League.

Jock Stein’s Celtic side would reach their second European Cup final in 1970 and, having begun that campaign with victory over Basel of Switzerland, were to face Benfica. The celebrated Portuguese had twice won the trophy and had supplied the nucleus of the national side who were every neutrals’ favourite in the 1966 World Cup, beaten 2-1 by hosts England in the semi-final. Such as the captain, Mario Coluna, Jose Torres, Artur Jorge, Simoes and the great Eusebio were genuine giants of the game.

Celtic’s march to Milan that season would also take them past Fiorentina (champions of Italy) and the supposedly invincible English champions, Don Revie’s Leeds United. It was a sequence that, nowadays, seems unimaginable. But it would begin with another mad night in Lisbon, one that would leave this 24-year-old novice sports journalist with ineradicable memories of a wildly eccentric first foreign assignment.

Traditionally poor travellers, Benfica had lost the first leg at Celtic Park so comprehensively – by 3-0 – that the Celtic players fancied themselves to win the return. One even gave me £50 to have on with Glasgow bookmaker Tony Queen, who travelled to the European matches on the team plane.

His investment had turned to dust before half-time. Under siege from the outset, the heroic John Fallon’s goal was breached by Eusebio after 36 minutes, and a second from Graca followed very soon after. Eusebio, not fully fit, clearly believed he had done his bit and spent the second half in the press box, watching over my shoulder.

The third goal came from Diamentino in stoppage time and caused a level of chaos I haven’t witnessed in more than four decades since. The referee, Dutchman Laurens van Ravens, signalled full-time as the ball crossed the line and, with fans invading the pitch and van Ravens taking the teams to the dressing-rooms without re-starting the match, nobody knew if the goal stood.

Five minutes elapsed before word came that Benfica had tied the aggregate score and there would be extra time. The confusion on the pitch was matched by the calamity in the press box. Thanks to the primitiveness of telecommunications in those days, a phone company employee was able to look at the clock, reckon the match was over and disconnect the temporary lines the Scottish newspapers had installed. The Reuters man had a permanent line and he asked his office to go into action.

As the press corps waited for rescue, Geoffrey Green, the venerable correspondent of The Times, was asked if he had had any luck. ‘No, dear boy,’ he said, ‘I’ve decided to send my stuff back by the seaward route, in a bottle’.

When the teams eventually completed the extra half-hour goalless, the tossing of the coin rule was invoked. Astonishingly, van Ravens once again removed the teams and summoned the Celtic captain and his counterpart, Coluna, to the officials’ changing room.

There, he asked McNeill to call and flipped a Dutch two-guilder piece. The Celtic captain danced in celebration when it landed heads up. But Ravens brought him to an abrupt halt by insisting that the first call was to decide who would call to decide the tie. McNeill had to go through the ordeal again.

He nominated heads again and this time the coin hit the floor on its edge and rolled into a corner, pursued by every interested party in the cramped room. McNeill had been right again, but it was only when the Sunday Mail’s man, Allan Herron, came back to the press box and assured us of what had occurred (complete with graphic details of the entire process) that we knew Celtic were in the quarter-finals.

Thanks to the customary 9.30pm kick-off time that is still common in Portugal and the bumbling of a referee, a match that began on Wednesday ended on Thursday. Having finally been reconnected with our offices and filed our reports, we arrived back at the Palacio Hotel in Estoril in the small hours, there to find Stein and some of the players sitting around the foyer.

Having enquired about our own adventures, he added: “I’ve said it often enough before, and I’ll never tire of saying it: you can’t come to hard places like this with too big a lead.” It was not the first or the last time that big Jock would sound like the wisdom of the ages. 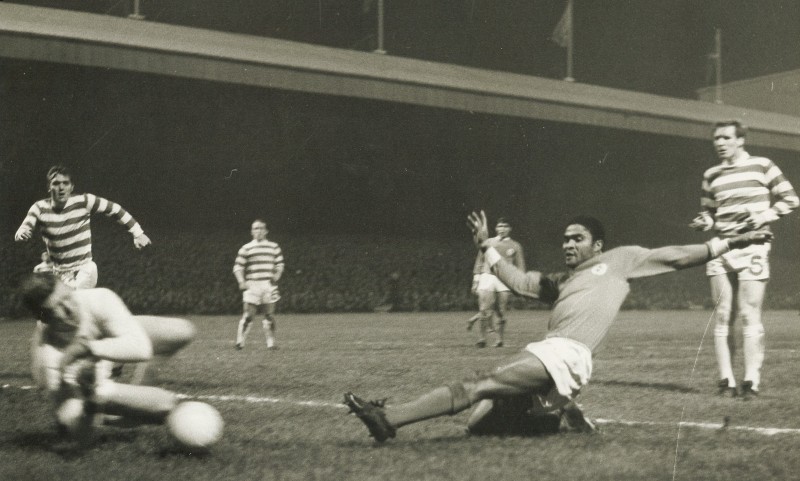