Graham McColl , sports writer for The Times and author

It took three days to travel by train from Glasgow to southern Spain for the 1982 World Cup.

Morning coffee on the Paris-Bordeaux train was delicious; from the Spanish border to Madrid we were forced to shell out hefty supplements to go first-class and to enjoy piped Beatles muzak and antimacassars on the luxurious seat headrests; Madrid to Andalucia, in contrast, was spent sharing the journey with caged chickens, dogs and other small agricultural animals, sleeping on the corrugated-iron floor with one’s nose a matter of mere inches from the foot of the frequently-used toilet door.

Tickets for the match with Brazil had been purchased in Glasgow from one Brian Doran, a Scottish resident in Spain who years later would be imprisoned for drug-running off the Spanish coast. For the matches with New Zealand and the Soviet Union, we waited until arrival in Spain and bought them on the black market – paying a mark-up to the fat Spanish policemen who loitered outside La Rosaleda, FC Malaga’s stadium, with wads of spare briefs.

“This is Strachan’s chance to earn himself a big money move,” once cynical fan muttered as the Aberdeen wide player went weaving wonderfully in and out of the New Zealand defence in Scotland’s opening match. John Wark, on the bus, raised a beer bottle to the fans after a 5-2 victory that seemed an adequate enough start, if a low-key one, to Scotland’s fixtures. Spanish waiters, serving outsize beers in the tallest of glasses, still raved about Strachan afterwards.

Seville, for Brazil, was quite different. Getting there entailed a five-hour journey to travel the 200 miles from our Torremolinos base through the Sierra Nevada, our train full of Scottish supporters being met with incredulity at every one of the frequent stops on its slow-moving journey and by a menacingly machine-gun-heavy police presence on the platform at Linarea Bea, Seville.

Once in the city, the afternoon sun beat down mercilessly, necessitating frequent stops for refreshment in the city’s darkened bars and the pre-match tarta manzana was delicious. Scotland started well, David Narey scoring that magnificent goal and the Spaniards in front of us turned and generously passed round their goatskin wine containers in admiration for our team. It couldn’t last and Roughie, fairly or unfairly, was made to look pretty daft as the Brazilians ran rampant. Post-match, on the way back into central Seville, one fan, kilted skirts flying, raised a huge cheer as a he sped past, hitching a lift on the rear of a racing fire engine.

As always, Scotland faced an all-or-nothing final group game. Joe Jordan, kept under wraps by Jock Stein until this match, came out flying and scored the opener, implanting a searing memory on my mind of him powering, gap-toothed towards us, behind the goal, while fiercely fending off a Soviet defender. The 2-2 draw sent Scotland out on goal difference – for a third successive World Cup. It was still a quirky, colourful, life-changing experience to be actually at the finals of the world’s premier football tournament and it had a profound impression on one impressionable teenager. Will the European Championships in France 2016 have the same effect on my son, who will by then be 13 years old? I do hope so. 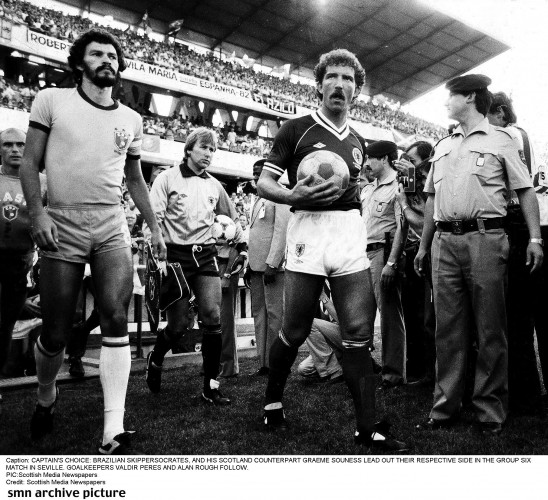