I grew up in the shadow of Hampden Park. If I stood on the window ledge of my upstairs bedroom I could just see the top tiers of the terracing. I certainly could hear the famous roar. And I did hear it several times that Saturday in April 1964 when over 120,000 fans watched Rangers play Dundee in the Scottish Cup final.

I started out as a Rangers supporter that day. Ten years old I was, with no more ambition in my head than to be a goalkeeper for the Ibrox side. But when Bert Slater, the Dundee goalkeeper made save after brilliant save from the likes of Willie Henderson, Jimmy Millar and Ralph Brand, I immediately switched my allegiance to the opposing team. Even though Dundee eventually ended up losing the final 1-3, Slater’s performance had won this youngster’s footballing heart. And his loyalty.

It didn’t really make a good deal sense for a wee Glasgow boy to be supporting a team on the other side of the country, for I never got to see them play. The nearest I came to knowing them was collecting their faces on football cards, a few grainy black-and-white pictures on the TV and the match reports in the newspapers.

But just over a year later I got a chance to see some of them when the Scottish League were scheduled to play against the Irish League* at Ibrox. There were four Dundee players in the team – Charlie Cooke, Andy Penman, Alex Hamilton and in goal, Ally Donaldson. Unfortunately, the great Bert Slater had just moved on to Watford.

It was a Wednesday night in September 1965, a school night. In the run up to the game, I nagged and nagged my mother to let me go. I was going hysterical with frustration as she continuously turned down my requests until she came out with the words I wanted to hear: “Oh for God’s sake. You know what? Stop your nagging and just go then.” Which was really meant as a challenge she assumed I wouldn’t dare take up. I accepted her words as the permission I desperately sought.

I had never been to a football match by myself before. I didn’t even know where Ibrox was. Except that it was somewhere in Govan and a local bus went there. Luckily there were some Scotland supporters on board. I got off when they got off, followed them to the ground.

I had no idea which turnstile to go to, just chose one at random. When the ticket seller said it’d be cheaper going to the boys’ gate, I said I’d just go in where I was, handed over all the money I’d got for my birthday the week before.

I had that usual suck of breath when I saw the emerald green of the pitch all lit up in the floodlights, then scrambled down to the boys’ enclosure. I ended up hard against the concrete wall separating me from the pitch, not far from the tunnel, waiting excitedly for the teams to come out.

Scotland won 6-2 that night. Andy Penman scored one of the goals. When I got home, my mother was frantic with worry, on the verge of calling the police to find her runaway child. My father was out in his car driving up and down the streets in a search for me. But I didn’t care. I had seen four of my Dundee players play.

The years passed and towards the end of the 1970s, I was spending a summer with a group of friends in the village of Villajoyosa in north-east Spain. One night I drove down to a bar we regularly visited in Benidorm.

The bar owner, knowing I was from Scotland, suggested I might want to chat to a family newly arrived from my homeland. I went over and introduced myself to the couple and their two teenage daughters. I was asked to join them, drinks were ordered and we all chatted away like old friends.

It turned out the man – he must have been in his early forties – designed golf courses. But then later into the conversation with a few drinks under his belt, he revealed that he used to be a professional footballer.

‘What position?’ I asked.
‘Goalkeeper.’
‘That’s what I always wanted to be. Who for?’
‘I had a stint at Liverpool. A few other clubs. Watford. Dundee.’
The details of the man’s career hit home. ‘I don’t believe it. You’re Bert Slater.’
‘Aye, that’s right. Didn’t expect you’d know.’
‘What do you mean? I ended up running away from home because of you.’
‘What are you talking about?’
‘Remember the 1964 Cup final?’
‘How could I forget it?’
‘You played a blinder. I switched to being a Dundee supporter after that.’
‘Well, tell my daughters. They never thought I amounted to much as a footballer.’

So I did tell his daughters. And I spent a wonderful evening with my childhood hero and his family.

Sadly Bert Slater died in 2006. I remember him as a great goalkeeper and a charming man. And I still support Dundee.

*Up until the mid-1970s, there used to be inter-league matches between countries represented only by players playing in their particular leagues. That meant English-based players like Denis Law and Dave Mackay ended up turning out for the English League. Other fixtures included games against the Irish League, the League of Ireland and even the Danish League and Italian League (for which Denis Law also played!) 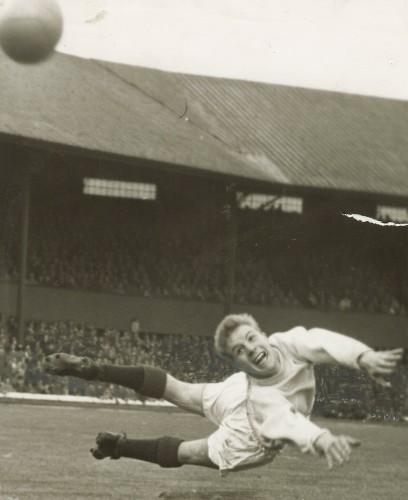 Bert Slater, the star of the 1964 Scottish Cup final, despite ending up on the losing side © The Herald
Posted in: Dundee, Writers
Associated Tags: Bert Slater, Hampden, Rangers, Scottish Cup