It wasn’t meant to be like that. Looking back, though, it was inevitable. I’d supported Glentoran all my life, as had my brother Chris. We were simply following the lead of my father, as young boys do, by supporting the club he had grown up watching.

So when Trevor Anderson, the then manager of Glentoran’s bitter rivals Linfield, arrived at our front door one Saturday morning to ask my brother to sign for his side, I’d half expected my father to chase him down the street in his slippers. But “Trevor” was shown into our ‘good room’ by my dad with my brother in tow, my mother made tea and biscuits. “Trevor” even shook my hand.

This wasn’t happening, was it? My brother, who I’d played football all my life with, was going to sign for the team we’d both hated as kids. We’d played football everywhere, in the street, in the local playing fields, and once, even, in a half-finished extension on mum and dad’s house at Moyra Crescent. We were a dynamic duo. I played him in and he scored. Northern Ireland reached the semi-finals of the World Cup in 1986 on the back of our performances, Chris a 10-year-old goal getter and me the slightly older, more worldly wise midfield playmaker.

Him moving on to better things wasn’t meant to be part of the double act, but you learn that when you leave childhood. Life always moves on and sometimes your own dreams become someone else’s reality.

In the end Chris didn’t sign for Linfield that summer. It took another year and another manager, David Jeffrey, before he left his club Crusaders for the relatively bright lights of Windsor Park.

And then something else happened. My dad died in 1999 after a short, ugly battle with cancer.

League titles followed for Chris, League Cups, too, but never an Irish Cup. Until 2002 that is, for a match against the League champions Portadown, who were favourites to complete the double.

Portadown took an early lead and then Chris took over.

His first goal lifted the roof. The ball arrowed into the top corner and extended out past the stanchion. When I see it in my mind’s eye now, the ball seems to have the effect of a match striking the side of a match box, there’s the spark as it smacks the net and then the full blast as 20,000 supporters realise what has happened. The flames of noise spreading expeditiously around the crowd like a line of flaring gunpowder.

His second won the cup. I knew it was coming, I had seen the goal a hundred times before, Chris sidefooting the ball past the advancing keeper, just as he had done in that World Cup quarter-final win over Brazil outside our front door in Moyra Crescent. I was one of the cheering mob – a life-long Glentoran fan, in raptures at a goal for Linfield.

Afterwards, the revelry spilled over into the car park outside Windsor Park. There were tears in my eyes as I approached Chris. He was surrounded by a throbbing mass of Linfield supporters but I got close enough to him to shake his hand and whisper in his ear “he would have been very proud.”. But there was a fierce din and in any case he was somewhere else. Transported to some blissfully euphoric place I could only imagine.

We’ve never talked about it since but I’ve often wondered if he spoke to my dad when he was there. 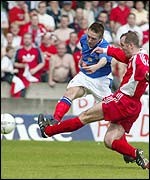