The Tartan Army might not like it, but Real Madrid have long since considered Hampden Park as something of a second spiritual home.

In 1960 the Spanish club descended on Glasgow’s south side seeking their fifth consecutive European Cup. Over 130,000 crammed into the old ground to marvel at the wizardry of Gento, Di Stefano and Puskas and, after watching them humiliate Eintracht Frankfurt 7-3, each and every one of them would forever be able to claim ‘I was there.’

Some 42 years later that breathtaking performance by a side still considered by many to be the greatest of them all was analysed and replayed by misty-eyed nostalgics as Real’s class of 2002 retraced the steps of their predecessors.

At stake was a record ninth European crown and again German opponents stood in their way, in the shape of Bayer Leverkusen.

The 50,000 crowd might not have compared with the hordes who were shoe-horned in in 1960, yet Hampden still crackled with expectancy and with very good reason. Madrid’s ‘Galacticos’ transfer policy was in full swing by then – Zinedine Zidane and Luis Figo had been recruited at a combined cost of £85m – and few outwith the German camp believed the Spaniards would be denied.

As I took my seat in the press box, just yards from the old trophy, I felt the same tingle of excitement and anticipation my father and thousands like him must have experienced all those years before. Not in my wildest dreams though did I expect to witness a moment that surpassed anything seen by those who stood on the slopes in 1960.

The game was remarkably open for a final. Play raged from end to end with the perpetual motion of Roberto Carlos down the left proving menacing for the Germans. Leverkusen, with the emerging Michael Ballack supreme in the middle of the park, were more than holding their own until Raul opened the scoring in the softest fashion imaginable as he latched onto a throw-in.

The Germans restored parity soon after, however, when their hulking Brazilian defender Lucio headed home a free-kick. They would have made it to the interval on level terms were it not for the intervention of a football genius.

Carlos hared after a nothing ball down the flank and hooked a cross back towards the edge of the box more in hope than expectation. As Zidane arched his frame and prepared to let fly with his left foot, Hampden collectively held its breath.

To say he caught the ball perfectly is an understatement in the extreme. His volley arrowed beyond Hans-Joerg Butt and flew into the net to give Madrid what would prove to be an unassailable lead.

It was a goal of such breathtaking beauty. In that instant, Zidane confirmed what we already knew – that at that moment he was the greatest footballer on the planet.

After retiring four years later, he confirmed in an interview that it was the greatest and most memorable goal of his career, not just due to the strike itself, but because of Madrid’s historical connection with Hampden Park.

If we are to judge great goals on not just how they are scored but on their importance and context then perhaps Diego Maradona’s slalom against England in Mexico ‘86 just pips Zidane’s strike that night. It is, however, in my view the greatest goal scored in the 55 years of the European Cup.

As I left Hampden that night I could only reflect on my good fortune at being there to see it.

Until my dying day I will be able to tell future generations ‘I was there.’ 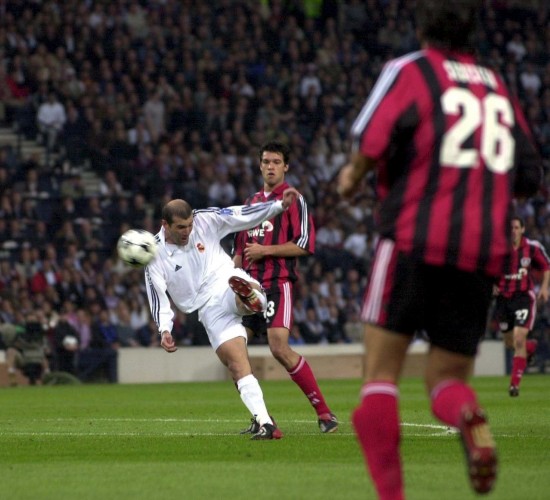