Lorna Millar is the reason I support Hibs.

The most tolerant of football widows, I don’t know who else but Mum would have indulged the inexplicable devotion to the green and white cause instilled in my two brothers and me by my dad, Tommy. Never a word uttered in protest as we made the bi-weekly trek from Campbeltown to Edinburgh, no matter what family anniversary was compromised. But even she must have thought twice when the old man suggested the six-hour drive to watch the youth team play a pre-season friendly against Highland League Keith.

Why? He’d got wind of an emerging striker who shared my name, a starlet who has since captained his country. Glossing over the fact our surnames are a letter apart, we headed off in search of Highland hospitality.

We found it en route in a little café (I’ll spare the owner’s blushes by leaving it nameless). With the mismatched cups and folded kitchen roll for napkins there wasn’t a Michelin star in sight, but a hearty bacon roll compensated for that.

Onwards to Kynoch Park, where they clearly weren’t anticipating much of a travelling support. Somehow the five of us found ourselves seated pitch-side on a beaten-up wooden bench beside the dugouts, with no shelter from the teeming rain. We were joined by an equally confused-looking Lee Power, a journeyman striker who was amongst a smattering of older pros drafted in to make up the numbers.

Predictably the game itself was unremarkable. Hibs scraped a scarcely deserved 4-2 win, but we got what we came for.

The young Kenny Miller clambered off the bench to bundle in the fourth and the Millar clan can take credit for the tactical masterstroke.

My younger brothers and I, with scant regard for our parents’ embarrassment levels, bawled throughout for the introduction of ‘the other Kenny’, drawing countless astonished looks from the Hibs staff.

The photo of us is a lasting testament to the insane lengths we, like so many thousand others, would go to in support of our club. Insane enough, five years later, to impress The Sun with the tale, who awarded us the title of ‘Scottish Football’s Most Devoted Family’ and with it the prize of a week-long trip to Japan and the 2002 World Cup.

Given our pick of the first-round games, which giants of the footballing world did we choose? Ecuador v Croatia – to see the only Hibee on show in the tournament, Ulises De La Cruz.

It was a once-in-a-lifetime experience, featuring a brush with Michel Platini, shirt-swapping with locals, strange electronic toilets and a narrowly missed earthquake. And we owe it all to that six-hour pilgrimage to Keith.

PS – The Sun only gave us four tickets to Japan. Guess which long-suffering Millar missed out… 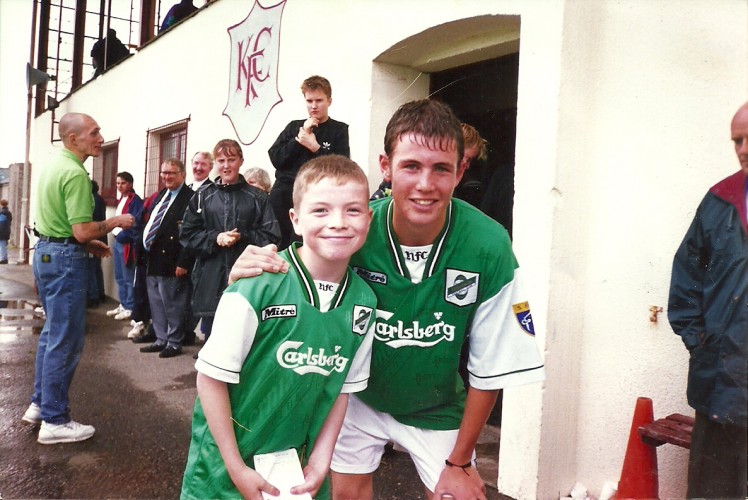