Going to a European away game as a Hearts fan, you don’t expect much, but going to Switzerland to FC Basel, a team with a superb home record in Europe, you expect nothing.

Stupidly, me and my friends Nick and Chris Rodger made the journey to Switzerland by supporters bus; that’s an experience I would rather not talk about, but after nearly 24 hours we arrived in the Swiss city.

As usual when a Scottish side goes away in Europe, the majority of the fans headed to the nearest bar in the city centre and so the party began, until it was time to head on the trams toward St Jakob Park.

At the stadium, which makes every ground in Scotland look antiquated as you make your way through the subway-style turnstiles, before making your way to the leather seats, were almost 3,000 Jambos in full voice.

While watching the club’s own television channel on the numerous screens throughout the stadium, the Hearts line-up is flashed up and everyone looks about in shock – Hearts are playing three up front, yes three.

We’re only a year removed from Craig Levein’s infamous 3-6-1 formation during our European adventure at Bordeaux, but now there was a change in management, Levein had departed for Leicester and club legend John Robertson was in charge and ready to give it a go.

As the teams come out everyone looks towards the stand opposite the Jambos. The Basel ultras, in a show of force, bring out a flag that covers the lower tier with some sort of monster on a tartan background; above it is a sign that reads ‘Brave Enough to Break Hearts.’

Then the game starts and the panic sets in as Basel continually push forward. But with half an hour gone, the unthinkable happened, Hearts went in front; being down the other end of the park we couldn’t make out what was happening until Dennis Wyness swung his boot at the ball and Ramon Pereira put his arms in the air.

The game became a blur as the Swiss kept pushing forward, but Craig Gordon blocked every shot that they took until, with quarter of an hour left, Basel finally equalised.

But we were all right with claiming a point, especially after we had lost to both Feyenoord and Schalke in our previous games.

Then in the last minute, not only did Hearts score, but Robbie Neilson scored; someone behind me jumped on my back, which would have been alright if he wasn’t overweight and nearly crushed me.

Every second seemed to go slower and slower, especially after Graham Weir missed what can only be described as a sitter, until the referee blew his whistle and a sense of relief came from the Hearts support.

As the Hearts players came to salute the fans, there was one man who was more excited than others and that was John Robertson, the legend turned manager was pumping his fist into the air to the joy of everyone left in the ground.

The journey back to the city centre was made more complicated as fans did the ‘bouncy’ on the tram and the inevitable happened: it came off the tracks and we were forced to walk.

We finally arrived back and the party continued throughout the night, with my mate Nick telling a young Hearts fan, who was no more than nine years old: “Sorry, but this is the best that it’s ever going to be.”

Others may disagree, with tales of the following season, but that magical Robbie Neilson goal was the last away European goal for the Jambos for nearly seven years, until Jamie Hamill’s penalty away to Paks. 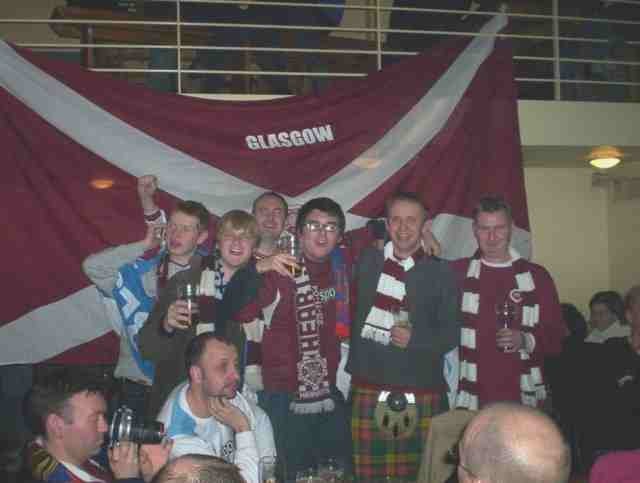 All Bar One in Basel after the victory
Posted in: Hearts
Associated Tags: FC Basel, Matthew Harold, Swiss, Switzerland