I have many memories of football throughout the years having been immersed in the sport since the age of five, or probably four, my memory is limited before that!

Certainly there is a fairly clear recollection of Celtic losing to Feyenoord in the 1970 European Cup final, but there is an even clearer one of the 1970 World Cup, when Brazil were phenomenal and more importantly they were in colour. We rented a colour TV for the event and it was the best investment my Dad ever made in me. I decided then and there that was how I wanted to play football. I wanted to play with flair, style and a love of the game. Forty-odd years later and 20 of those as a professional footballer never managed to dull that memory of those golden shirts on the violently bright pitch, all bathed in sunshine.

Sometime later the experience as a fan was perfectly summed up in a game that represented everything I lived through as a Celtic fan. The league decider was against Rangers at Celtic Park and I had a ticket. We got there early so that I could stand at my favourite spot in ‘The Jungle’, towards the Celtic end, in line with the eighteen-yard line and half way up. I had bought a ticket for a friend as a birthday present and what a present it turned out to be. With 10 men and losing, they fought back and won 4-2.

I can remember Murdo McLeod scoring from 20 yards, directly in front of us, and I can remember the wildest celebrations I have ever witnessed in my life. We Scots are a reserved bunch, but in that moment reserve was pointless and strangers danced and hugged other strangers, dancing and screaming incoherently. Walking to the train station after the game the excitement didn’t die; tens of thousands of us sang ourselves hoarse, all the way to Bellgrove.

I am happy I retain that memory because it wasn’t filmed for TV due to a strike, so you had to be there to feel what it was really like. There were other phenomenal European nights, which all blur together, but the 4-2 game still stands, alone and vivid.

As a player there were many memories as well, but the one that sticks didn’t happen on the pitch. I had just finished playing a game for Chelsea, we had won and I had the man of the match champagne under my arm, having scored one and created another. After the game I usually walked home from Stamford Bridge, I can’t see Ashley Cole doing that now, mingling with some stragglers who had been at the game.

Just at this moment an elderly man fell in step with me and said, ‘You are the boy Nevin, aren’t you?’ When I said yes he replied, ‘I don’t go to many games any more, in fact I don’t go out much, I spend most of my time in the house myself. I don’t think the game is as exciting as it used to be, but my son came round last week and told me to get down and see you play. Well lad, I really enjoyed it and you are the type of entertainer I am happy to pay to watch.’

At that, he turned and walked off. I fancied chatting a bit more, then it dawned on me: that in a nutshell is precisely why I was playing football. Winning is great and important, but the idea of entertaining, of giving some enjoyment was what had hooked me in all those years ago when I watched Brazil. Maybe there were other folk out there who were not having the happiest of times, but I had given some joy to them for an hour and a half. For me there was no better feeling.

So, yes there were goals and wins and trophies and caps but the memory that has stuck was on the Kings Road, meeting that man and him reminding me of what sport is really about. 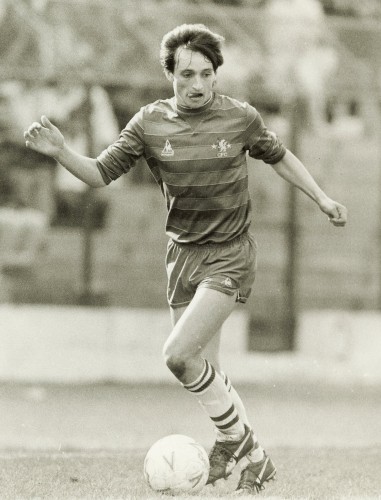