I’ve been fortunate in my 43 years as a football writer with The Sunday Post to travel the world.

Without wishing to sound like a big-time Charlie, I’ve been coast to coast in America and Canada, visited just about every country in Europe as well as covering games in Dubai and Japan.

Obviously there are some outstanding memories. However, I keep returning to an occasion just before I started with The Sunday Post.

It was my first trip to the old Empire Stadium and it’s the one I’ll never forget.

I’ve worked from the old Wembley and the new Wembley more times than I care to remember. However I can safely say 1967 will never, ever be bettered.

Scotland’s international team and fanatical fans – not yet the Tartan Army but just as patriotic – were still trying to recover. Firstly from not qualifying for the World Cup Finals in England the previous year and secondly from the fact the hosts had the temerity to win the trophy.

However there is nothing more dangerous than a wounded Scotsman. So it’s no surprise that 1967 turned out to be a vintage year.

Celtic won the European Cup. Rangers lost in the final of the European Cup Winners’ Cup after extra-time and Scotland beat the World Cup holders on their own ground. Not a bad way to recover from 1966!

Not being a supporter of either Old Firm team and not working for someone prepared to pay me to travel to Lisbon or Nuremberg, Wembley was my nemesis.

I travelled from Dundee Tay Bridge to Kings Cross on an overnight old ‘Wembley Special’.

A quick bit of window-shopping in Soho then it was off to Wembley.

The answer was they couldn’t.

The winning margin would have been far greater had they not tried to take the Mickey out of England.

I vividly recall Law giving Jim Baxter a row for playing keepie-up and antagonising Alan Ball, whom he kept referring to as Jimmy Clitheroe. Law, who famously refused to watch England’s World Cup final against West Germany the previous year, was more intent on winning by as many goals as possible.

Still, Scotland won far more convincingly than the score suggests before Wembley was invaded by the tartan hoards.

It was all good-natured fun. Impromptu eight-some reels abounded. The only damage done was by fans who took a bit of Wembley turf home.

Then it was the overnight train back to Dundee. No sleep for two days didn’t matter.

Scotland won a famous victory and I collected my winnings from a £5 bet at 4-1. 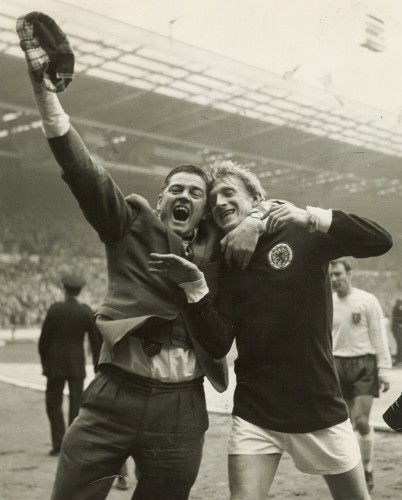