November 21, 1998. First Glasgow derby since we stopped 10 in a row. Darkness falling, weather getting worse, there was a certain negativity in the air about Celtic.

Celtic suffering a goalkeeper crisis; we had Tony Warner from Liverpool in goal for the first time. A certain Johan Mjallby was making his debut as well.

i remember sitting stuck in traffic, the supporters bus trying to turn onto the Gallowgate when the teams were announced on the radio: Warner, Boyd, Stubbs, Mjallby, O’Donnell, Lambert, Moravcik, Riseth, Larsson and Donnelly.

Looking back on it, I will never forget the uproar at the team selection on the bus. Guys cracking up thinking we were playing 4-5-1 at home. Moaning about negative tactics at home. Oh, how they were wrong!

Manager Venglos pulled off a master-stroke – Larsson and Moravcik up front, Simon Donnelly wide right. I don’t think I have ever heard a roar like the one after 11 minutes.

Ball played in from the left, a step over from Larsson and goal! The place erupts and a dazed Moravcik is mobbed by his team-mates! What a day it turned out to be.

Full-time and over the tannoy the song ‘Sweetest Thing’ by U2 plays. The bus home was the quickest journey ever – everyone still singing and on such a high.

It was something that only happened again in August 2000 – and we all know what happened that day, too! 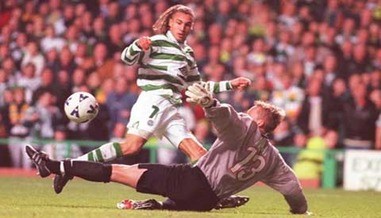