May 18, 1991 will always hold a special place in the heart of every Motherwell fan.

Well, if you pardon the pun, it isn’t every day that the Steelmen get their hands on the Scottish Cup.

I still remember the feelings of joy as our super sub, Stevie Kirk, bundled in his extra-time winner and then of relief, followed by absolute delirium as referee Davie Syme put his whistle to his lips to seal our epic 4-3 win triumph over Dundee United.

It brought that once-in-a-lifetime moment, something you always dreamed about, but probably, in your heart of hearts, never thought you would ever see.

It was also done in typical Motherwell style – the hard way!

Even after Dundee United had cancelled out Iain Ferguson’s opener we fought bravely back with Ian Angus and Phil O’Donnell, brave as a lion, god bless his soul, putting us into a commanding 3-1 lead.

Every Motherwell fan was left biting their nails when United scored again and then fearing the worst when Darren Jackson burst through at the death to force the game into extra time.

I can still picture United keeper Alan Main sliding out on his knees in front of us in celebration and if I am being honest I probably have never forgiven him or Jackson to this day – fearing they had crushed our dream.

Suddenly with another 30 minutes of extra-time and a half-fit goalkeeper, in Ally Maxwell, even the most ardent of Motherwell fans would have struggled to back their heroes.

But credit to Tommy McLean, he rallied our team and the Scottish Cup legend ‘Kirkie’ popped up and, as they say, the rest is now history, as Tom Boyd stepped up to lift the cup.

I remember going back that night and watching the whole game back again and then the next day taking to the streets of Motherwell to see the open-top bus procession.

Days and moments like that are what make all that physical and emotional commitment of following your team worthwhile.

Digging out my old video of the 1991 Scottish Cup run still gives me goosebumps today – from where it all kicked off with that win over Aberdeen.

Kirkie’s winner was a special moment for me because by that time I had moved to the Granite City and, for once, was able to gain my revenge on my mum’s side of the family and my so-called school friends – who continually taunted me about the Dons and their glory days under Sir Alex ‘bloody’ Ferguson.

I remember watching through my fingers, on Sky, as we sneaked past Morton in a penalty shoot-out and then shamelessly getting my elderly neighbour, who was more like my adopted-Granda, to make the five-hour road trip to Hampden so I could see the goal-less semi-final clash with Celtic. Even I didn’t think I could chance my arm a second time and had to make do with Sky again to see us finally put the Hoops to the sword at the second time of asking.

I also recall getting on a supporters’ bus from Motherwell the morning of the cup final with my Uncle Scott, the same man who had started my claret and amber love affair all those years earlier, when he had chapped on the old police gate at Fir Park and opened the door to my team.

I have to hold my hands up, as a Hamilton boy, I crossed the great Strathclyde Park divide. Maybe things might have been different if former Accies striker Jamie Fairley had given me some better advice when I was taking part in a half-time penalty shoot-out for my school, Townhill Primary, at Douglas Park. Who knows?

But, anyway, I have my Uncle to thank for guiding me towards his hometown team and sometimes I wonder if I should have reported him for cruelty rather than thank him for an addiction that will live with me till the day I die. 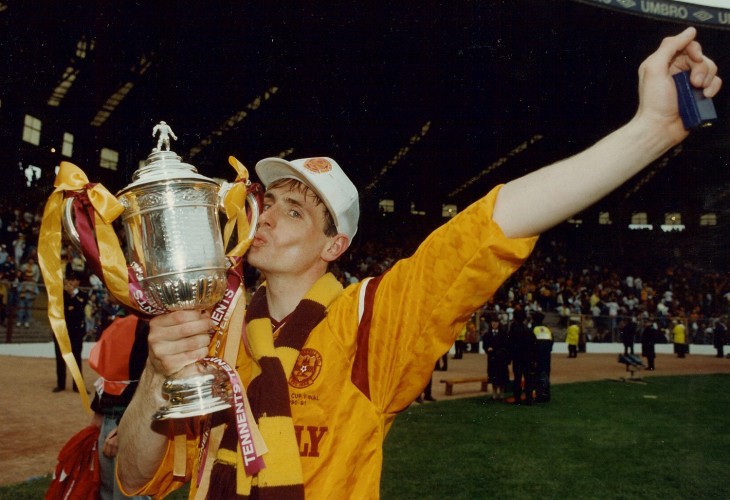