One of my favourite memories from bygone years is of going to Ibrox with my late father and my brother in 1978 for John Greig’s testimonial match against a Scotland select.

Ibrox had over 60,000 in attendance and it was a fine, sunny day. The score was 5-0 to Rangers. ‘John Greig MBE’ the Rangers support chanted as he was given thanks for his 100% commitment to our club, his inspirational leadership through times of troubles, a disaster in which 66 fans perished on the stairwell of the Copland Road terrace, and his captaining the club to two trebles at the closing of his playing days.

I don’t recall much about the actual game itself, only the occasion and the colour on show. I also do recall Greig running through on goal towards the end of the match, barely challenged in truth, to score the final goal of the game to wild applause.

In some ways this was also an omen of things to come for Scotland. They were set for the World Cup in Argentina. Derek Johnstone looked like he would feature strongly, he was at the peak of his career and he had just won Scotland’s player of the year award. He had also scored a couple of fantastic headed goals against Northern Ireland and Wales. Sadly, however, Ally MacLeod had a fall-out with him and began to lose the Scotland dressing room as Argentina turned from a dream to an absolute nightmare.

However, the memory of Ibrox on that sunny day, perhaps, if I’m not mistaken, the last game there before the renovation to the all-seater stadium we have today, will never be forgotten. 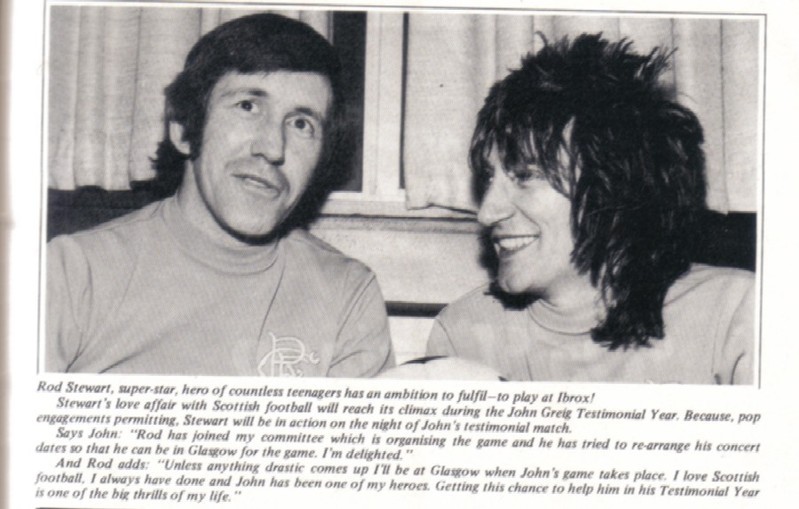