I looked at the radio, and then my door, mapping out my route to the stairs down which I would leap in two bounds, before orbiting the large wooden post at the foot of the bannister, to swing into the study where my dad was working… still the jeering goes on, still no whistle from the ref… and then a faint trill…

‘And that’s it, all over, it finishes here at Portman Road 1-1. And plucky little Aberdeen have really achieved something tonight.’

I was off, through my door at lightening speed, making the most of buffeting through my sister as I flew towards the study. Halfway down the stairs though, I found my dad who’d been planning the same journey to find me.

His eyes seemed to be bulging out of his sockets like he was about to appear in a Tom & Jerry cartoon, his big 1981 hair was especially big, and he stood with two arms in the air, his mouth gaping, speechless.

Even I knew that nothing like this had ever happened before. Never had we played a side of this sort of standing and produced a result like this. It may only have been a 1-1 draw and we still had the second leg to play but we had held our own against none other than the UEFA Cup holders.

This single, humble stalemate, against, Ipswich Town, a team called the “tractor boys”, from the unlikely English county of Suffolk, was nonetheless, without any shadow of a doubt, the most encouraging, the most impressive, the best European football result in our ‘plucky’ little club’s history.

In the 1960’s, my dad came of age as an Aberdeen fan in a mist of mid-table mediocrity, a mist that was cleared intermittently only by the drama of snatching top flight survival from the jaws of relegation. And the stuff he remembered seemed to say it all; on our way to games, he’d fondly recall his favourite players, people like Jim ‘Rosemary’ Clunie, John ‘Tubby’ Ogston.

They were clearly just having a laugh, especially ‘Tubby’ Ogston, only supporters of crap teams could end up inventing affectionate nicknames for players with weight problems. His only memory from the one cup final that he’d seen Aberdeen contest when we lost 2-0 to Celtic in 1967, seemed to be that a drunk Celtic fan standing next to him had pished in his jacket pocket.

However, things had certainly improved by the early 80s and the Aberdeen team he and I were watching was already the best we’d ever seen, mounting the first serious domestic challenge to the Old Firm of Rangers and Celtic for decades, and winning the title. But there was no danger of us getting carried away beyond our domestic ascendancy, when we then met Liverpool in the European Cup, who tanked us 5-0 over two legs, laying bare the unfathomable gulf between Scottish and top flight European football for all to see.

Now, somehow, down in Ipswich, that gulf seemed to have been closed. And as I watched my dad’s performance unfold, now slowly dropping his arms with great melodrama, his expression, still defiant, still fixated on me, I realized that this was about something much bigger than the exploits of simply our football team. It was one of those moments, when my dad, the man, and Scotland, the nation, merged into one.

It would be years before I’d properly understand it, but my dad’s face, right now, was telling me for the first time that this draw with Ipswich represented a new hope for the nation. That those demons of self-doubt or self-destruction that had plagued his Scottish aspirations from Aberdeen in Europe, Scotland in World Cups, to his ideals for the nation in the wider sense, could actually be overcome.

Those demons that punished us in the 1978 World Cup for daring to trumpet so brashly, so bullishly to the world that we would win it, through the half-cut sounding Andy Cameron and his outrageous ‘We’re on the March wi’ Ally’s Army’ anthem. Demons that possessed my dad to go storming around the house, banging doors and cursing when it ended in ignominy at the hands of “mighty” Iran.

The same demons that ambushed us on the battlefields of Flodden and Culloden, on the high seas of the Darien expedition, the 1979 devolution referendum and then Aberdeen’s abject humping at the hands of Liverpool in the 1980 European Cup.

So humiliated, so wounded by all this was the Dad I’d come to know, that he even ended up pretending not to care when Scotland notched up a rare win over England at Wembley the following May.

This friendly international fixture used to take place at the end of the domestic season and would guarantee huge turnouts from Scots fans, especially for the games in Glasgow. We’d joke in the playground that the English fans were too scared to come to Hampden, because Scotland fans were so hard, and the English were all sappy poofs.

My sulking dad had a new more sober explanation, claiming that there was nothing really in it for the English, fans or players; this great rivalry with England only really existed in our minds. In fact, he asserted that the only time the English really got upset about losing to Scotland, a 2-1 defeat at Wembley in 1977, was a reaction to the Tsumani of blootered Scots that overwhelmed their pitch, broke down their goal posts and ripped up their hallowed turf after the game.

According to my dad, in a real football sense, England had bigger fish to fry, rivalries with proper countries, commensurate with their own idea of themselves and their abilities: France, Germany, Italy. Now, the Ipswich Town draw seemed to be flying in the face of all this. Dad continued to stand, gaping in silence, daring to believe that things would change now for Aberdeen, for Scotland. And this time, he was right.

Two weeks later, the Aberdeen masterclass was truly unleashed on European football, as our team stroked the ball around expertly, supremely, a ball I’d see later on the highlights that glided and glistened like balls in World Cup games, while we ripped UEFA Cup holders, Ipswich Town to pieces.

When we scored to make it 3-1, Dad and I went berserk and ended up damaging a floorboard in his study into the bargain, one that would creak every time someone walked on it from that day on, to remind us of this monumental event. But we had broken more than just a floorboard in the study that night.

Now, we really had broken an enormous psychological barrier, in our minds and, we would learn, in the mind of our team. We knew now that we could beat the big sides, even the big English sides, and not just when it mattered to us, to them as well. That night, a little known Alex Ferguson signalled his arrival on the European scene with his unlikely Dons, and more than a few eyebrows would have been raised across the continent.

And so it was. That victory against Ipswich started an incredible journey that took us to a place that no other Scottish football club of our ilk had ever been and no Scottish club of any ilk has been since. Stuck out on the edge of the North Sea, a distant beacon of light, properly isolated from the rest of the civilised world, our team soared to the top of the European game.

In the breathtaking space of three seasons, with a bristling confidence that seemed to defy everything that we had come to expect from Scottish sport, we won the European Cup Winners’ Cup and then the Super Cup to be crowned Europe’s No.1 team, the only Scottish side to have done so.

It was born out of a transformation that seemed only to happen when there were just us Dons fans there, packed into our modest 24,000 capacity stadium, in the darkness of those Wednesday night European matches, hiding out of the reach of our historic Scottish demons of self doubt. 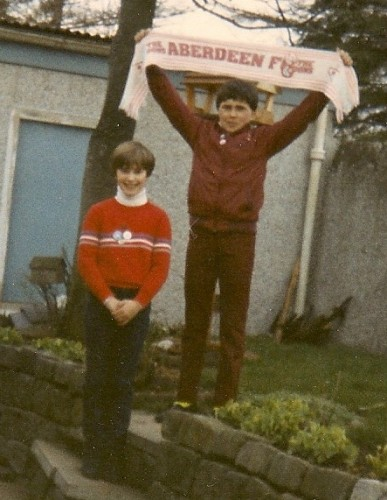