JANUARY 17, 2003 What a match. The first half had a few opportunities which should have been put away, such as Dean Windass seaming into the box only for Kevin Pressman to flap it onto the bar.

However, things got more exciting in the second half when Alan Quinn ran through the Sheffield United defence to put Wednesday one up. This didn’t last long, however, and with Neil Warnock telling United to get thier act together another chance came along, this time from Michael Brown.

He ran rings around the Wednesday defence and was only to be stopped by the foot of Pressman. This chance only served to urge the team on and the equaliser came in the shape of an all-out attacking move in which Stuart McCall hooked the ball into the box and Steve Kabba flicked it past Pressman in the Wednesday net.

What was to come next will live in the memory of the Steel City derby for many years. United got a free-kick halfway inside the Wednesday half. It was floated in and eventually headed clear by Gary Monk.

His header reached the edge of the box, exactly where Michael Brown was standing. He struck the ball on the volley with immense power into the top corner to raise the roof at Bramall Lane.

With Wednesday shell-shocked, it wasn’t long before United killed the game off. Kabba raced down the right wing and, when he reached the byeline, he hit it into the box for Wayne Allison to tap in into an open goal.

Another amazing comeback from the mighty Blades. 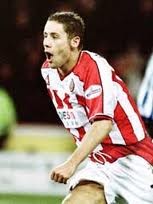