STEEL CITY derby, 2005. Not a great game from any perspective as there weren’t many chances and it was very tight with nobody willing to really take a chance in case of making a mistake.

However, the only goal of the game came after 24 minutes from Alan Quinn. He became the only player to play and score for both Sheffield clubs in the Steel City derby when a shot was deflected out to the edge of the box and he rifled it in.

The last few minutes of the game were intense, though, as Wednesday pressed hard for an equaliser but never got one.

Overall, not a very intense game but United won and history was made at Bramall Lane on that day. 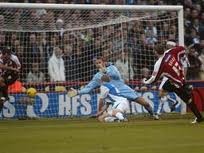