My father took his football seriously.

“There’s no such thing as a friendly”, he used to say, and he proved this at the benefit match at Parkhead on April 30, 1989, after the Hillsborough disaster, when in response to being told politely by a Liverpool supporter that it was only a friendly my father released a volley that flew into the top corner of the poor guy’s ear. My father believed in the segregation of supporters, even at friendlies. We lost 5-1, and he wasn’t a happy pappy.

Going to see Celtic with my father was the only way to socialise with him as an adult, but it was often an awkward and embarrassing experience, as he was the proverbial bear with a burnt arse and could start a fight in an empty room, never mind a packed stadium, or a bus that was full to the gunnels. He never drank, and wouldn’t even go to a café – waste of money when there was a cup of tea to be had for free in the house. Matches with him were pretty Spartan affairs, walking there and back if the weather was fine, saving on bus fares. After he got married he’d stopped travelling to away games. He was a home fan, to be found at home on away match days, ear glued to an old radio that crackled like a fry-up and was, in its last days, tied with a shoelace to stop the batteries from falling out, Chinese batteries bought to support a communist country. They never seemed to last long. Nor did the Polish jam. Krakus – tasty on toast but abandoned by my father after the Poles abandoned communism.

One thing my father loved was beating Rangers, or even scoring against them. He remained loyal to Eyal Berkovic, long after other fans turned against him, simply because he got two goals at Ibrox in a game we lost 4-2 on November 7 1999. If anyone criticised Berkovic my father would turn round and say, “Well, he scored two against that mob”.

Another thing my father liked a lot were those big European nights, but not that fatal floodlit fixture against Partizan Belgrade on September 29 1989, when five goals proved insufficient to see us through (a 2-1 away defeat trumped a 5-4 home victory). We won the match, and scored a handful, but lost the tie. The prolific post-communist Pole, Dariusz ‘Jackie’ Dziekanowski, scored 4 of our 5 goals. I remember trying to explain to my father on the way home how we had managed to lose after winning by the same margin as our opponents, and ending up at 6-6 on aggregate – even stevens, six and half-a-dozen; except we were knocked out. Just as he didn’t see the point of friendlies my father didn’t do aggregates. I was going to tell him at least it was a team from a communist country, but thought better of it.

If there was one thing my father hated more than friendlies or aggregate defeats it was no-score draws. He needed the release and relief of a goal to calm him down, or he was on tenterhooks. At 96 he was a tad too old to travel when Celtic drew 0-0 with Barcelona in the UEFA Cup on March 24 2004 – going through 1-0 on aggregate. I went with my brother, Jimmy. When the match ended, and us away fans were slowly making our way out of the stadium, we started singing “The Willie Maley Song”, over and over, chorus after chorus. The group of supporters I was with turned a corner and came face to face with another section of Celtic fans singing the same song: “And they gave us James McGrory and Paul McStay, They gave us Johnstone, Tully, Murdoch, Auld and Hay, And most of the football greats, Have passed through Parkhead’s gates, All to play football the Glasgow Celtic way”. We were facing each other but separated by a low wall that shielded us from a sheer drop. It was too far to shake hands across the gap, but not too far to see our jubilant expressions mirrored in the delighted faces opposite. That was a memorable moment.

When my father died in 2007, at the age of 99, a silence fell on the new radio I had bought him a few months earlier. He never liked that radio – a Roberts – and it’s sat silent since his passing. In nearly a hundred years of supporting the Bhoys he’d seen most of the football greats pass through Parkhead’s gates, including the three Jimmys – Quinn, McGrory and Johnstone. So when I walk down London Road with my brother towards that great cathedral of football that is Parkhead, and think of my father a hundred years ago being taken by his father, Ned, to see the likes of Jimmy Quinn, just as he would later watch Jimmy McGrory with his brothers, Willy and Timmy, and later still take me to see Jimmy Johnstone with my brothers, Eddy, Jimmy, and John, I know the history. I know what it means to keep the faith, to be faithful through and through, to be shielded from the drop, sheltered from the storm, never walking alone. Above all, I know I don’t like friendlies. 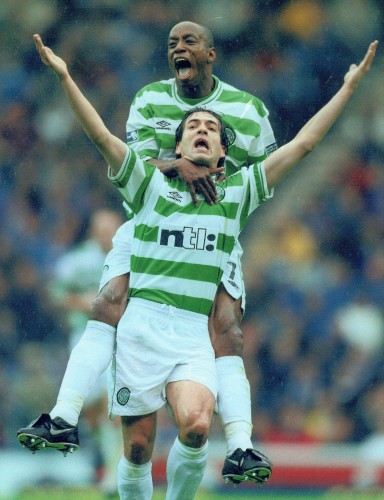