It was mid-afternoon but the grey of a dank winter’s day was already yielding to night when the phone rang. ‘It’s a lady from Tottenham Hotspur,’ said my seven-year-old son, passing the receiver and returning to his Lego.

‘Was that Oliver who answered?’ she inquired. ‘He’s been selected as our mascot for the game at …’

She explained that by signing up Ollie as a ‘Junior Spur’ the previous summer – in the vain hope that a goody bag of freebies might convert him to the cause – he’d become a mascot contender – and today his number had come up.

I was both thrilled and jealous; Ollie was underwhelmed, his willingness to take part due more to curiosity than joy.
Three weeks later, he, my wife, dad and I left Glasgow for Sunderland’s Stadium of Light and a Saturday evening match to be broadcast live on ESPN, my son primed for his big day after a crash course in all things Tottenham.

After drinks and photos in the Sunderland boardroom with the hosts’ charming chairman, Niall Quinn, and the home mascots and families, it was time for Ollie to don the pale-blue away strip delivered by the Tottenham kitman.

How my heart sank when the Sunderland official explained that only Ollie was permitted to enter the sanctum of the away dressing room to pass around his autograph book.

Then, it was on to the pitch for a pre-match kick-about with the Sunderland mascots as the ground filled and the players warmed up. Granted a touchline vantage point, I was in awe as the men in whose hands my mood rests every weekend jogged to and fro within touching distance, while my wife fretted as her boy shivered for an hour of a winter’s evening in a short-sleeved shirt.

That was forgotten, though, as Ollie re-emerged from the tunnel clutching skipper Michael Dawson’s hand, to face a raucous crowd whipped up by the strains of their Prokofiev signature tune. Ollie wore the same smile of bemused excitement we had witnessed on his first day at school. Dawson, sensing our lad’s isolation as his team-mates did their final warm-ups, chatted paternally to Ollie while completing his own last-minute stretching.

As the game kicked off, the three of us and Ollie were guided round the pitch to the away end, where a few Spurs fans greeted their mascot’s arrival with ‘we’re-not-worthy’ bows of mock-worship. A perfect day was complete when Spurs came from behind to win 2-1 – new idol Dawson equalising and Niko Kranjcar volleying home a screamer in front of Tottenham’s newest fan.

The TV footage of Ollie is, of course, Sky-Plused for posterity. But that day spawned a far greater legacy: the Spurs-mad Mini-Me I’ve always craved.

Six months on, and no televised Spurs match can now be missed, no opportunity to attend a game spurned. I now have a kindred spirit with whom to share those rare highs and frequent, soul-destroying lows. Hook, line and sinker.

Yes, there is guilt at the emotional burden I’ve imposed on him. But regret? Not for a second. 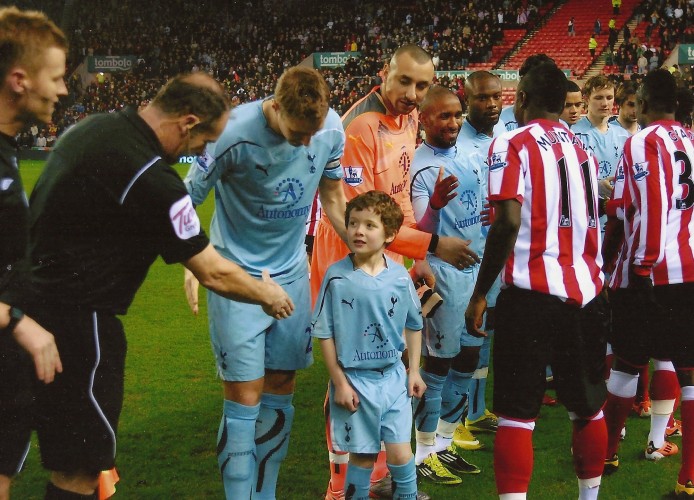