My first live football game happened just after England won the World Cup in 1966. It was the start of the new season and Blackpool were playing Leicester City at Bloomfield in a midweek game.

I was eight-years-old and had been totally awestruck by the fervour that surrounded that famous summer at Wembley when we defeated the Germans 4-2 in extra time. My Dad had noticed my sudden enthusiasm and asked me if I wanted to go. I jumped at the chance.

Blackpool had Jimmy Armfield as their captain that night and Leicester City had the great Gordon Banks in goals, both of whom were in the triumphant England squad. Unfortunately for me, Alan Ball had just been transferred to Everton a few weeks prior.

As I recall, and I could be wrong, the game ended 0-0 but nevertheless, the occasion could not quell my excitement at my first real football game. Over the years, I became a regular at Bloomfield Rd until the late 70s when I moved away and became a Stretford Ender at Old Trafford.

However, I never forgot my Seasiders and always looked for their scores in the Saturday results broadcast. Needless to say, last season was almost like a dream as Blackpool found itself in the Barclay’s Premier League for the first time. 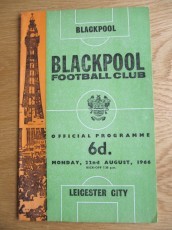