It was the biggest rivalry of them all. Bigger than the Old Firm, bigger than Elgin and Lossie. Hopeman (us) versus Burghead (them). The Cavers against the Brochers. In the Broch. And so we journeyed into the heart of darkness, two miles down the Moray coast.

We were young, barely in our teens, but we approached the match with the utmost seriousness. We had to. We couldn’t head back to Hopeman in defeat. We’d be turned away.

The venue wasn’t the Burghead playing fields either. No, it was the Burghead Thistle ground down the road. That meant nets. Dugouts! Not that we had any managers.

We had a shit hot team, I have to say. And that gave us confidence. We were there to get one over the Broch, to put a few past them.

We were 10-0 up by half-time. Those oranges tasted sweet. Kevy Bruce gave us the early lead then quickly helped himself to a hat-trick. And another hat-trick. Whit a shot Kev had. Think Jorg Albertz times Hot Shot Hamish to the power of ten.

Craig Fiske was our midfield general and Mark Fennell bossed the defence. Not that Mark had much bossing to do that day with our opponents rarely crossing the half-way line. I hugged the right touchline but hardly saw the ball since Stevie Murray was on the left wing. Think Davie Cooper. Well, maybe not Davie Cooper. Stevie’s a Dons fan. Peter Weir then.

We ran out something like 21-0 winners. We certainly netted 20. The Brochers might have nicked a goal, but I don’t remember it. We absolutely slaughtered them. Well, Kev did. I think he ended up with five hat-tricks.

But some of us would be missed. Mark and Craig, two of the standouts of that Hopeman team, two invincibles, lost their lives in a car crash a few years after that glory day in the Broch. And I’ve now spent more of my life without them than I did with them. I remember them just the same. Cracking footballers, cracking mates with bright futures ahead of them. The world is less well off without Mark and Craig. You are my football heroes.

And you Kevy Bruce. I’d love to see you hit another 30-yard screamer into the top corner. Or nearly burst the net from the penalty spot. Poor Innes McPherson broke his arm because he stood up to one of your spot kicks and tried to save it. Maybe this time you could fire it safely into the corner and no-one would get hurt. 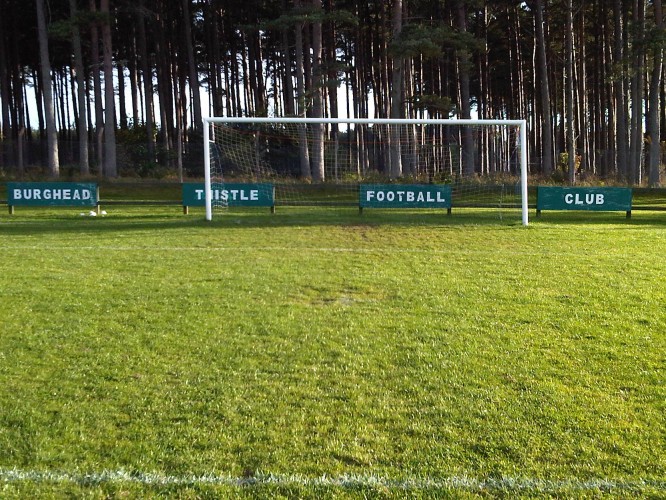