My affiliation with Manchester City as my English team (Kilmarnock being my first and greatest love) goes back to 2005. Watching Match Of The Day with my Dad (a Man United fan) made me realise I didn’t have an English team. I wanted a different team from my friends who were Man U and Liverpool in the main – a team that wasn’t in the ‘big four’, played in some kind of blue and white, had similar form to Killie and hated Man U – City seemed the obvious choice.

Though I’ve been called a – mistakenly – over the years by some, I’ve chosen my English team to follow and I wouldn’t reconsider changing allegiances for anything.

In 2011, when City won the FA Cup under Roberto Mancini, I knew this would lead to more success. And that came in May of 2012 after a simply brilliant season.

My highlights of the season were the October 2011 Manchester derby, played at Old Trafford. I was awestruck as City hammered United 6-1. I was quietly confident that City would come out on top in the end, but not by quite so much!

My other highlight was the final game of the season: May 13, 2012. City had fought back from eight points behind United to go top on goal difference. City had to equal United’s result to win. A draw or a loss and a United win would give them the title. United played Sunderland and City played QPR.

United scored on 16 minutes – no reason to worry though as Pablo Zabaleta scored for City. Half time, and City were going to do it. Cissé scored after the break for QPR, and then Mackie put them up 2-1 – disaster! The longer the game drew on the more hopeless it all started to seem. City were bereft of ideas – ‘typical City’, I thought. Throwing it all away at the last hurdle.

QPR had Joey Barton sent off – and that left five or six minutes of injury time. On 92 minutes Edin Dzeko equalised for City. The time ticked. Mario Balotelli passed to Sergio Aguero – WHO SCORED!

3-2 and with United finished at Sunderland, City lifted the title. What a finish! 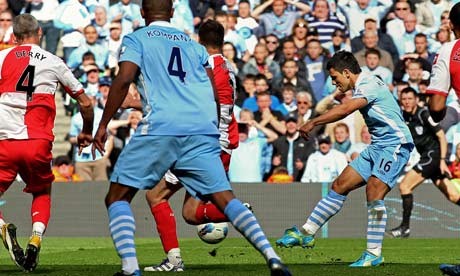