The triumphs are terrific, but it is the disasters that stick around in sharp focus.

Back to November 1980, a time when I am one unusually lucky 13-year-old. Lucky because in my Uncle Duncan I have a relative who, asking only lifetime gratitude in return, is prepared to both fund and ferry me around the country with Aberdeen.

And that is fantastic because with Willie Miller, Alex McLeish and Gordon Strachan in the side, plus Alex Ferguson as manager, we can’t lose.
Duncan and the pals he travels with are 10 years older, young shipyard workers awash with disposable cash, and the trips are a happy mix of beer, banter, cards and celebration after the inevitable win.

I get tips from the winners, the occasional sly scoof off a can and McDonalds’ best burgers, an exotic treat in the days before the march of the Golden Arches had reached North East Scotland.

My Dons supporting folks are happy to leave me in his care and, one unfortunate incident at Love Street when he nearly gets lifted after a half-eaten Fruit Club shoots out of his hand as he is berating the ref apart, I am safe and as happy as a pig in shit.

One trip, though, is different. Liverpool. Champions of England and European Cup winners in 1977 and 1978. A club who can boast Kenny Dalglish, Alan Hansen and Graeme Souness, plus Bob Paisley as manager.
In the first leg at Pittodrie the visitors edged it, 1-0, the winner coming thanks to a typical late run from Terry McDermott.

Somehow the game was close enough to encourage crazed optimism that Liverpool’s lead could be overturned in Merseyside. This at an Anfield Stadium, where Liverpool had not lost in 76 games. What followed instead was a nightmare.

Six hours down on a football special. ‘Special’ being British Rail’s description of a cattle truck with busted lights, flooded toilets and non-existent heating.

Herded off the train in the rain, force-marched by riot cops through a nightmare estate where orc-like women screech abuse from the windows of the high flats and straight to the ground.

Forced from there to the segregation fence, where the sight of Liverpool taking the lead practically in the warm-up doesn’t stop the local mad squad from deciding to shower us with gob. As the one closest, I take the brunt until Duncan heroically swaps places with me to take the hit, or to be accurate, the spit. I am staggered by the kindness, but not for long, because looking down he spots something I had somehow managed to overlook: the unused snorkel hood of my parka jacket. In one swift motion, he pulls it over my head, zips it up hiding my head in it’s depths then neatly shunts me back into the deluge.

The gob and goals – the eventual 4-0 humping includes an own goal from Miller – continued after that, but from then on it was okay.

Better times, I knew somehow, were ahead. A staggering victory over Real Madrid in a European final lay just three years off on the horizon.

It will be a night in which I, my uncle and even my dad will all manage to disgrace ourselves but that, as they say, is another story.

If I never said it before: Duncan, thanks for the memories. Even the bad ones make me smile. 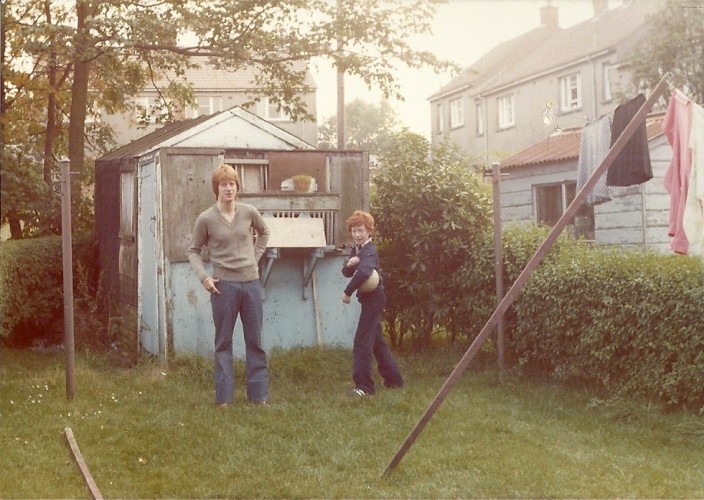