In Juninho we trusted. All of us: the fans; the town; the fans’ Mams and Nanas who lived in the town. He was smaller than many of those Mams and Nanas, yet built to last like everything else Teesside had cherished.

Perhaps that was it; perhaps we saw in him the guile and graft of a region that gave the world railways and the Sydney Harbour Bridge. Perhaps we just liked the fact he once wagged his finger at Philippe Albert.

From the 1970s onwards, Middlesbrough had lost too much. The industrial prowess that prompted Gladstone to call the town England’s ‘Infant Hercules’ had withered. Hope too. In 1986, even the football club went bust. Somehow, it clung on to dear life and bloomed. An ambitious local hero called Steve Gibson saw to that.

By the mid-nineties, an ex-England captain turned manager was buying Brazil’s player of the year and one of Italy’s greatest goalscorers. Robson, Juninho, Ravanelli: names to shake Teesside out of its stupor and have it believing in itself again. That’s how much football mattered.

Through the 1996/97 season, those two and the perm-haired Jack-in-a-Box Emerson mesmerised. We scored goals I’d only ever seen before in computer games, and, at our best, played football to make life worth living. Unfortunately, defending prowess was harder to come by. Predictable, perhaps, in a squad containing Derek Whyte and Phil Whelan.

Leading from the position just off the front was Juninho. Our little Brazilian was the king of swaying hips, the ball-dancing creator-in-chief. Even better than that, and saying so much about our psyche, Juninho ‘tackled back’ and ‘got stuck in’. That’s why we trusted in him.

Unfortunately, Bryan Robson’s hopeful ploy that Juninho would create two goals for every one that Steve Vickers or Neil Cox gave away didn’t strictly work. For the worst part of a season, Boro engaged in a game of limbo with the relegation cut-off line. When we failed to show up for a fixture at Blackburn, the FA deducted three points.

As for the cups, though, the strategy almost worked: in March, we contested the Coca-Cola Cup final; in May, the FA Cup final.

Of course, we lost both games and were relegated, yet I consider that season my finest footballing memory. It contained the rapid swings from hope to despair that help a moody boy of 15 develop into a maladjusted man, and suited my teenage need for angst.

Further, it contained the precise moment in which I cared most about Middlesbrough and football. Following final day relegation at Leeds, Juninho slumped to the ground and the funeral-jacketed Bryan Robson comforted him. Through an Elland Road goal net I stared tearfully at them and felt like my life was over. Me and football were at the most intense stage of our relationship. That has a kind of greatness to it. 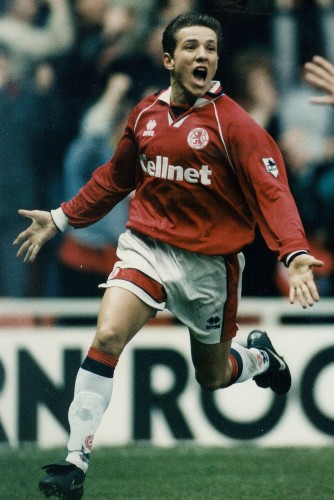