It was when football put the odd into odyssey that I made an irrevocable decision: the life of an ordinary Joe wasn’t for me – but Spain was.

Graeme Runcie and I viewed it as a personal challenge when the UK Government advised football fans to avoid the 1982 World Cup because of possible Hispanic sympathies there after the Falklands War.

So we hopped on a train in Aberdeen on June 11 and emerged dusty, scruffy, tired and lucky to still be alive in Marbella on the afternoon of June 14, about 24 hours before Scotland v New Zealand in La Rosaleda stadium Malaga.

Already we’d survived a mini National Front riot on the Calais-Paris train; false arrest at the point of a Guardia Civil rifle 30 minutes across the France/Spain border; hobknobbed with two Algerian soldiers carrying, smoking and dealing bricks of dark brown hashish which were the size of gold ingots in Fort Knox, and swapped our SFA membership cards for 2000 degree proof raw Eau de Feu, which must have been made using battery acid and brewed in somebody’s sock but nonetheless sustained us on the final 12 hours on the Madrid-Malaga ‘Sol Express’.

Had Spain ‘82 ended there and then, we’d have had our money’s worth. No question.

But Graeme’s next door neighbour was Alex Ferguson and so, that first night, we, he and several of the Scottish Premier League’s finest dined in Puerto Banus while we sat in stunned silence during stories which, it’s fair to say, unlocked this vague idea that professional football might be even madder than anything we’d seen in the previous three days. I was intrigued.

One month later my mind was made up. We’d seen Scotland’s three games, swapped shirts with Brazilian women, even if they weren’t there to follow their Seleçao and were simply working in a bank; seen Fergie tear strips off a former Scottish footballer selling black market tickets from an attaché case; experienced even more gunplay than Phil Spector; hitched our wagon to four Danish females in their Fuengirola villa; excelled at the Scandinavian ‘Captain Pep’ drinking game; turned down work on a major Costa del Crime yacht; been brought the ‘extra’ Scotland strips (to swap with any Brazilians we’d previously missed) having placed an emergency order with Mrs Ferguson before she brought her sons over for the latter stages of the tournament; inadvertently locked over 200 people into a youth hostel for several hours and, in short, vastly outperformed our national team.

But I knew, even as we downed the last drops of our Baileys Irish Cream carry-out on the Stagecoach (Brian Souter and Ann Gloag, not John Ford and John Wayne) which carried us on the last leg home that football, despite all we’d experienced in Spain, wasn’t about fun, high-jinks and that deep satisfaction at a tournament well played with which Graeme and I were returning home.

Football, in its purest essence was about what the hell Alan Hansen was trying to do when Scotland were within touching distance of the next round and Willie Miller – the mighty, unequalled Willie Miller – about to put the ball into the Mediterranean against USSR in the last group game. Delicately lifting his tutu and ensuring his knickerbockers didn’t get muddy, Hansen barged the great man over, USSR scored and I knew I must find the answer to the primal scream inside me. “Why Alan, why?”

In that instant I keenly understood Orsen Welles and Rosebud.

So, like Scotland’s own Citizen Kane, I’ve been searching for the elusive answer, and redemption, ever since. Thanks for that Alan. 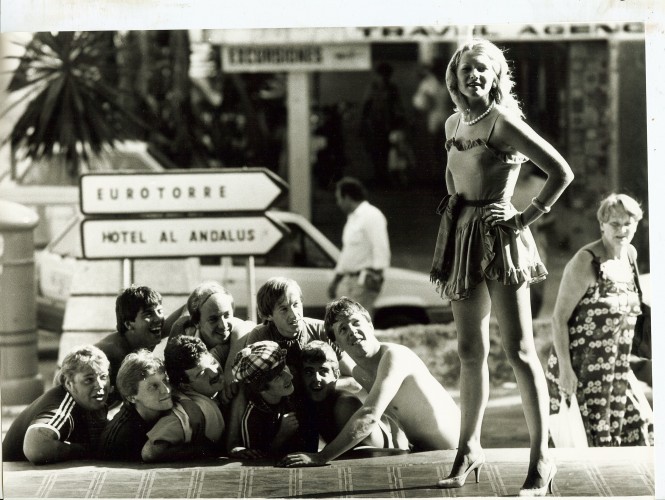