IT IS May 11, 2006. The footballing world has just seen Jose Mourinho’s Chelsea romp to a second Premier League title and the warm-up has begun in earnest for Arsenal’s assault on the Champions league final.

The country is in a frenzy over the upcoming World Cup and all the newspapers can talk about is Wayne Rooney’s deja vu-like metatarsal. But not here. Not in this city. We have more important things on our agenda today.

Today is a day for our Geordie Nation. A day for us to honour one of our own. To pay homage to a son of Tyneside. To celebrate an era which will never be forgotten. To give thanks to Alan Shearer at his testimonial.

Walking up to the stadium, it was like any other match. It’s never different around here. The cradling din of 50,000 northerners heading in the same direction, to one place, the cathedral on the hill.

Inside, there is no well thought-out poetic ditty referring to his glory years, no song based on an 80s pop classic reworded to include his name. He is different.

The deafening din of 52,500 of us grows. Before the arrival of the teams, the place shook and the stadium turned black and white with two enormous No.9’s in gold at both ends of the ground. Then, as the teams lined up in a guard of honour, the man arrived. The noise was outrageous. I remember seeing on the TV later that young Master Shearer had to cover his ears.

The game – a 3-2 victory over Celtic – was a drab, awful affair but the noise and celebration never died. But this memory isn’t about the match. In fact, apart from the inevitable 93rd-minute penalty, I couldn’t tell you who scored.

This was about the pride in my city and in my club. About the power of a hero!

I’ll leave you with Sir Les Ferdinand: “There were 52,000 inside the ground and probably millions more watching on television, but unless you were there to experience it yourself it is hard to describe. I would go as far as to say that no other club anywhere in the world could generate an atmosphere like that.” 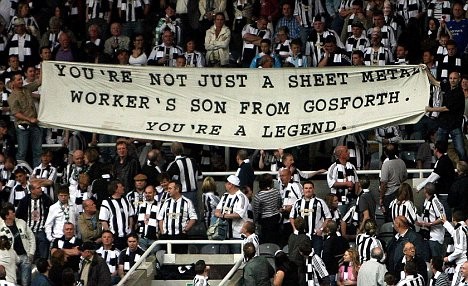