November 27, 1994. A date that’s etched on the minds of Raith Rovers fans everywhere. And still the day that immediately sprang to mind when asked to come up with my favourite footballing memory.

Oh sure, there have been some glory days (honest) following Scotland. Having one of the best seats in the house as James McFadden crushed the French with his audacious strike from, oh, 60 yards, wasn’t it? Actually going to a major finals with our national team also stands out.

It has also been a privilege to follow two Scottish club sides all the way to a European final, even if Celtic lost on a sweaty night in Seville, while Rangers were defeated in Manchester.

Watching Ronaldo – the original, not the Portuguese poseur – in his prime at France 98 was something to tell the grandchildren about one day. Right after they’ve been bored for the umpteenth time by tales of watching Vasco da Gama beat Manchester United in the Maracana at the very first FIFA World Club Championship, or of seeing a young Carlos Tevez star in the the 2004 Olympic football tournament.

On a purely personal level, though, nothing tops the Coca-Cola Cup final of season 1994-95. Short of Scotland actually winning a European Championships or World Cup, nothing will ever eclipse the glory of Raith Rovers winning their first (so far) major trophy.

Stevie Crawford’s opener against Celtic shocked everyone except the player himself, cocky wee so-and-so. When Celtic fought back to go 2-1 up with time running out, well, I vividly remember writing the words ‘Game Over’ on my notepad. Oh we of little faith.

Jason Dair’s jink inside to hit a dipping shot, Gordon Marshall’s failed attempt to hold the ball, Gordon Dalziel’s finish with his nose … ah, the magic of the moment, only bettered when Scott Thomson saved Paul McStay’s penalty in the shoot-out.

Was there any regret that I was in the Ibrox press box, instead of sitting in among the 10,000 Raith fans, having to rein in my celebrations? It quickly passed with the realisation that I was the lucky official chronicler of this historic moment for the esteemed Fife Free Press; what a privilege to be associated with such a momentous occasion, however tangentially.

More glories were to come, with Raith getting past Gotu Ittrotarfelag and Akranes, before being knocked out of the UEFA Cup by the eventual winners, Bayern Munich.

Ah, that night in the Olympiastadion, when Danny Lennon launched a thousand scoreboard screensavers by putting Rovers ahead. Another contender for favourite memory. But not quite good enough to topple … erm, what was that date again? 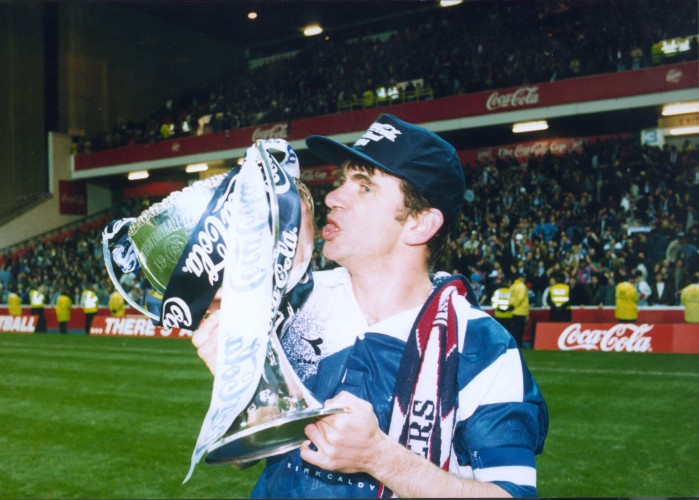