Diego Maradona. When you hear those two words, what image automatically pops into your head?

Maybe it’s the infamous ‘Hand of God’ goal when the outside of his left fist was used to punch the ball past Peter Shilton into the back of the net against England in 1986. Or maybe it’s the famous strike now dubbed ’Goal of the Century’, scored just four minutes later in the same World Cup quarter-final, when he burst past five outfield players in a ferocious 10-second, 60-metre unstoppable surge before dribbling past Shilton. Your own memory of Maradona is probably one of those. But it’s not mine. Not any more.

My own personal memory of one of the true living legends of the game is separated by a distance of more than 5,000 miles and 22 years from those events at the Estadio Azteca in Mexico City. My own brush – and that’s all it was – with Maradona happened on a freezing cold November night in the east end of Glasgow in 2008.

I was initially far from excited at the prospect of being despatched to Celtic Park to watch a mundane training session a few days before Scotland were set to host Argentina in a much-anticipated friendly at Hampden. A large glass of red and a double bill of Coronation Street was far more appealing after a day at the office.

Within 10 minutes of the players being put through their paces, the assembled media had abandoned their positions in the press box and moved to the front of the stand for a closer look, myself included. Argentina may have been without star man Lionel Messi, as a result of an agreement between the Football Association and Barcelona, but the likes of Carlos Tevez, Javier Mascherano and Gabriel Heinze were all taking part. And there, in the middle of it all, like a conductor directing a world-class orchestra, was Maradona.

When the session ended, we forgot we were journalists and let our professionalism drop just for a few moments. Spiral-bound notepads filled with shorthand were thrust forward in desperate hope of a famous scrawl. One forward-thinking hack even brought along an Argentina top and a hard-back biography. We went back to being what we started out as: football fans, pure and simple.

Of course, we were all outdone by the Celtic under-14 player who found Fernando Gago’s misplaced St Christopher medallion on the Parkhead turf following a frantic search led by none other than Maradona himself. His reward? Maradona’s hat and gloves. Yup, the gloves that had just covered the most famous hand in football.

In the same way that I was too young to truly appreciate Maradona’s craft and guile in 1986, that 13-year-old was probably too young to appreciate what had just happened to him. But that night is my memory of Maradona, more than two decades after he took the world by storm. And do you know what? It beat watching Corrie hands down. 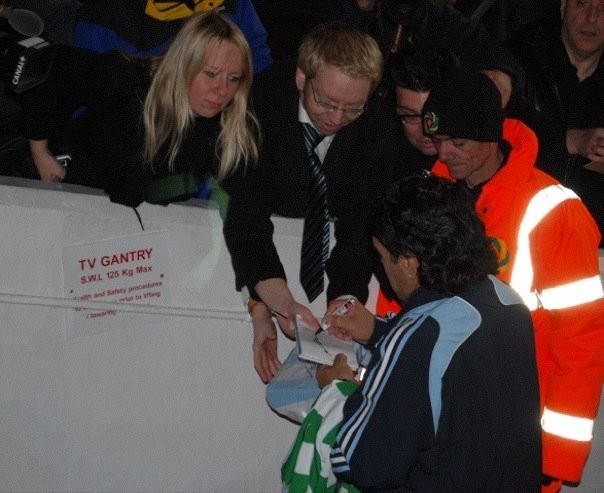